The best jokes to come out of the 2022 deputy presidential debate came in hard and fast.

•Rigathi and Karua were the centre of focus 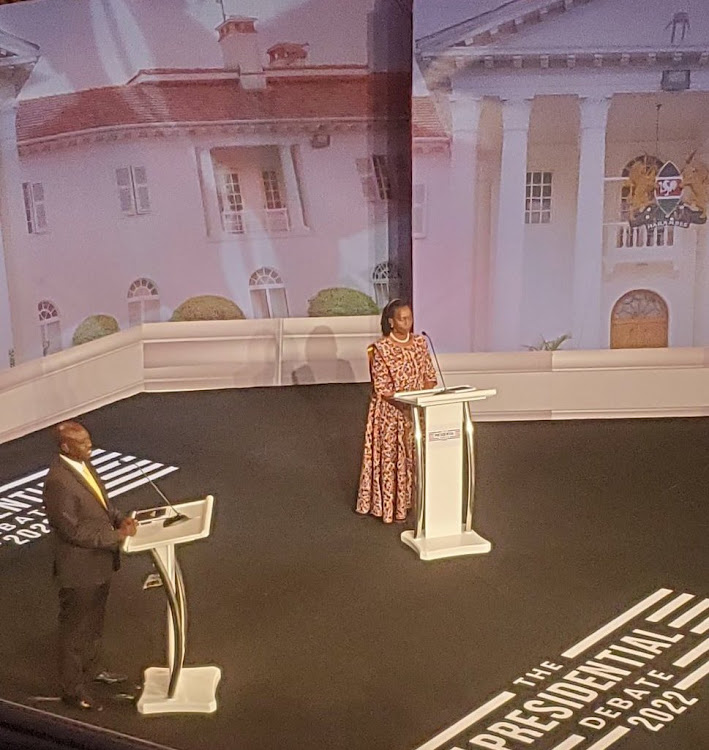 After being on the campaign trail for a while, the different running mates finally met on the debate stage.

The debate went down at the Catholic University of Eastern Africa.

Rigathi Gachagua and Martha Karua faced off in the second half of the debate after Ruth Mutua and JKustina Wamae.

The debate for each lasted 90 minutes. The candidates tried to explain their agenda to Kenayns but lost it along the way.

Twitter was set ablaze with very hilarious and dark humor about each candidate as they engaged each other.

The debate between Gachagua and Karua lit up the internet as the former taunted his opponent with jabs and leading to sarcastic memes about the experience of watching the debate.

Netizens agreed it was very easy for Rigathi Gachagua to taunt Karua with his personal attacks as they eagerly awaited for her to aim shots at him as well.

Even the moderators struggled to keep time as Sophia Wanuna urged the attendees to stop laughing or jeering the running mates.

Ruth Mutua and Justina Wamae did not disappoint as well.

Wamame amused Kenyans after talking about ugali  and her confidence saw many give her the thumbs up.

Many said that they expected the debate to be bad but it had exceeded their expectations. Many shared GIFs and memes to indicate how they felt after the debate. See some examples below.

Dear fellow Kenyans who impressed you the most?

Gachagua: Kenyans don't have money in their pockets.

SMART: Where do you get your campaign finances

Sophia: You're simply saying you will go after the first family.

Rigathi being received back at UDA headquarters😂😂 pic.twitter.com/8QJt3Tzp4p

Rigathi Gachagua: My competitor resigned when the country needed her the most. If Martha Karua couldn't work with Mwai kibai, she definitely can't work with anybody else.

Question: What is state capture?

Wangui Ngirici's team has been giving the youths Wheelbarrows and handcarts(Mkokoteni).
Entertainment
11 months ago

Two hours ago, Lillian Ng'ang'a confirmed that she and Juliani were an item. She disclosed the news on her Instagram page with Juliani also posting ...
Entertainment
11 months ago
WATCH: For the latest videos on entertainment stories

Sakaja had an apartment in Yaya by 4th year