Nairobi Senatorial candidate Sifuna explains what transpired between him and Alai

• Over the weekend, Nairobi senatorial candidate, Edwin Sifuna and Kileleshwa MCA candidate Robert Alai were involved in a minor scuffle during one of Azimio rallies.

• Sifuna defended himself saying he was trying to tell all the people on board including Alai to get off. 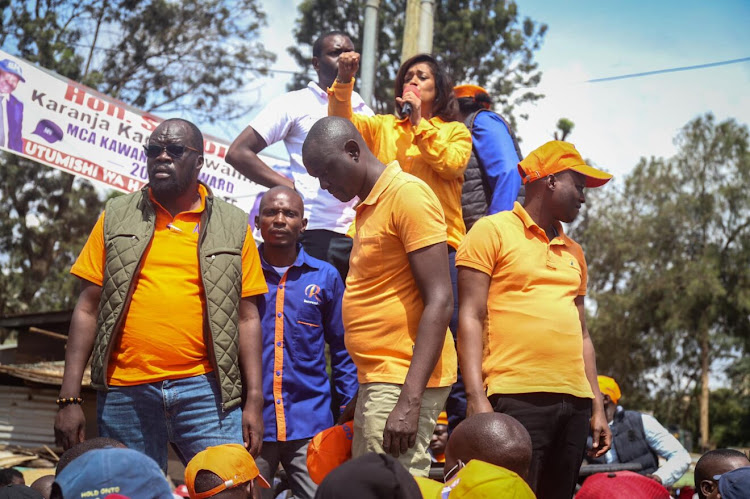 Over the weekend, Nairobi senatorial candidate, Edwin Sifuna and Kileleshwa MCA candidate Robert Alai were involved in a minor scuffle during one of the Azimio rallies.

In a video that has since gone viral, a number of people are seen atop a campaign vehicle pushing each other around.

It was then that Raila Odinga was heard angrily calling out Alai's name as he tried to calm the situation.

Addressing the weekend scuffle on Capital FM, Sifuna played it down saying it was not as people were making it look.

"No I don't think it is as bad as people want to make it look like actually, it was just a safety issue you know, that was my vehicle and as you know cars have a capacity. They have a carrying capacity there are only so many people you can have on your hood," Sifuna said.

He says as a result of his car having so many people on board, he was left counting losses after the windshield of his 1999 Mitsubishi Pajero was shattered in the process.

Sifuna defended himself saying he was trying to tell all the people on board including Alai to get off because it was a safety issue but Alai didn't want to listen and what happened next was him 'easing him off'.

"I took it to the shop to have a roof rack installed so if you are going to come on my car please come to the top. But there were all sorts of people all over the hood and you know that there is only so much weight it can take," he said

Adding, "So I tried to tell them that it was a safety issue and I was trying to tell him to get off because we were just too many people but he didn't want to listen so I had to ease him off if you will."

Bahati-I was offered Sh50 M to step down