The governors have issued some crazy demands for their retirement package

• Kenyans were up in arms after the governors gave their demands.

• Some Kenyans said that the citizenry should rise up like Sri Lanks. 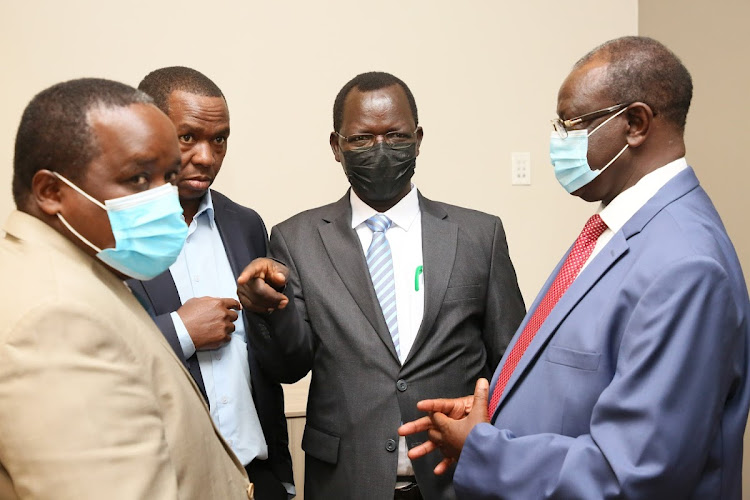 A Council of Governors meeting in the past
Image: The-Star

Kenyans have reacted to the crazy news about what retiring county governors and their deputies are seeking from the government.

Some of the governors and their deputies are demanding lifetime monthly pensions of over Sh700,000 monthly, a lump sum equivalent to their 1-year pay, a 3,000cc 4WD car, fuel allowance, a personal assistant, and medical cover for local and overseas treatment.

Let's not forget that a governor earns around Sh1 million a month, so that means paying them 700k a month for the rest of their lives is akin to having lifetime governors and at any point, a county shall be paying 2 governors and 2 deputies.

Kenyans were understandably upset and said as much in the comments section. Check out some of them below;

son of wanga then let all civil servants also earn lifetime monthly pensions equivalent to 80% of their salaries juts like the governors. otherwise, wouldn't that equate to discrimination under Article 27? Unless we are saying some civil servants are more equal and important than others

athlete I don't understand how we only use Twitter to rant I mean, why don't we go the Sri Lankan way. We are the ones encouraging them btw.

i_Muiri And we want roads, piped water and cheaper basic goods, sadly, we cannot always get what we want. That isn't how the world works. Also what contract job pays a lifetime pension and such benefits. Gratuity yes.Pension for what could be 30yrs easy for 5 yrs work….Naah fam.

Pharih It's coming at the wrong time …..no one will listen to them.

Leonard Wekesa No. They actually know this is the best time because majority of you are so distracted by the campaigns. By the time we are done with the campaigns they'd be sorted na waendelee kula pesa kimya kimya.

Man Pini Kenyans can afford that for just 47 people.

Dominic K Muendo In the long run, it will be grossly expensive due to cumulative numbers.

𝙺𝙸𝚁𝙾𝙽𝙶`🇰🇪 Where can I buy guns,, this is too much now 😑

antony chege Hope you're talking about other country Not Kenya tutawachija hawa.

Mwangi Kimani Money will have to come from country budgets (which will have to be reduced to pay for massive fiscal shortfalls). 2nd they will have to arm-twist an incoming hostile governor and county assembly. Even I wish to have Beyonce cook breakfast for me in lingerie.

Mwangi Kimani Assuming at least 15% of county budgets go to top county officials as graft, that's at least sh.60 billion x 10yrs = sh.600 billion which is more than enough to feed their retirement.

Kevin Kiumbe If they never built a hospital for 10 years, why would they be covered to travel abroad? We worship mediocrity!

Margaret Nyamiwa That question should be put up there on those billboards they're using to campaign.

THE PROSPECTUS Sri Lanka Smiles everytime it Hears and Reads about Kenya, with this pace, might be a potential Replacer😄<br>Barrack Otieno The biggest irony is that Health care is a devolved function but they want to be treated abroad why, the health facilities in their devolved units are not up to the required standards.

Bob wa Magari 🇰🇪 🇺🇬 🇹🇿 How much do they pay the police in Kenya again?

Sakaja arrived 20 minutes past 8 pm, the time the debate started.
Politics
1 month ago

Kelvin Kioko, popularly known as Bahati, has been handed the Jubilee party ticket for Mathare parliamentary seat
Politics
2 months ago

VDJ Jones: Why I'm vying for the Nairobi Governor seat

"I believe the youth will vote for me, People have seen what I can do." - VDJ Jones.
Exclusives
6 months ago
WATCH: For the latest videos on entertainment stories

Sakaja on why he keeps his family private