• Award winning musician, Kevin Kioko Bahati has alleged that his Mathare MP opponent, sent goons to rough him up in a bid to have him step down from the race.

• He says despite it all,  he has forgiven him and that no one will ever intimidate him into stepping down from the Mathare MP seat. Award winning musician, Kevin Kioko Bahati has alleged that his Mathare MP opponent, sent goons to rough him up in a bid to have him step down from the race.

The aspiring politician alleged that in a video which he shared on his Instagram page, Monday morning.

In the video which was recorded at 1am moments after he got home, a disappointed Bahati can be seen looking very sleepy and worn out.

"Today has been one of the hardest days in my campaign life and the hardest day in my political career, you know I have gone through a lot over the last couple of days and God is good, God is faithful we are here, " Bahati said.

He added, It started with getting a lot of challenges and fights of course from my opponent who wanted them to take away my ticket which I was given, the other side they brought propaganda that I had stepped down which I refused.

"They wanted me to be given a government appointment which I also refused and Today because I have to be brave and I have to what it takes because I am fighting for the people of Mathare I have to repeat this again, I had a job and I have a job as a musician." 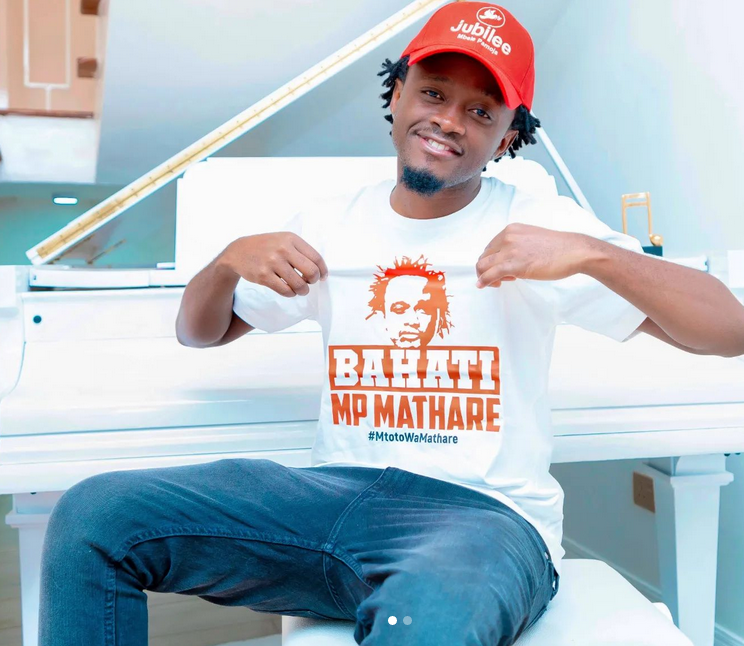 He says after his opponent saw him at the Azimio rally, he sent him some goons to mishandle him and try and stop him which left him with a tattered polo shirt.

He says despite it all,  he has forgiven him and that no one will ever intimidate him into stepping down from the Mathare MP seat.

"I urge my Mathare people even if they keep fighting me do not give up, 9th August our lives will never be the same again. Let's bring change and let's vote one of our own. If someone fears me that much to an extent of sending people and threatening my life, clearly he knows that I will help the people of Mathare," added Bahati.

This comes after Azimio presidential candidate, Raila Odinga endorsed Bahati's opponent, Anthony Oluoch for the Mathare seat and offered Bahati a government appointment should he step down in Oluoch's favor.

Bahati who was seated on top of a car was visibly taken aback by that and he angrily stormed out of the campaign rally and vanished into the cheering crowd.

In a very special video, Diana Marua and husban dBahati unveils her huge baby bump as she wears a pink short dress.
Entertainment
3 weeks ago