• Senator Johnson Sakaja took on KTN journalist Zubeida Koome after she jokingly asked about his names.

• An exchange degenerated when the host and KTN News Anchor and Editor Zubeida Koome asked Sakaja to confirm his name. 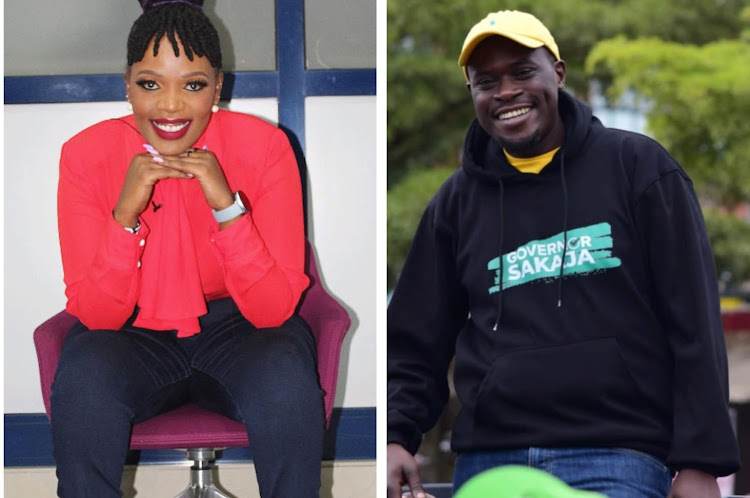 TV anchor Zubeidah Kananu is trending after the Nairobi gubernatorial debate, where she was one of the moderators.

"Jina lako ni Sakaja?" was a question from Zubeida which sparked mixed reactions among Kenyans online.

During the session, there was a light moment after Senator Johnson Sakaja took on KTN journalist Zubeida Koome after she jokingly asked about his names.

"Traffic mbaya tutasort,"  Igathe made light of the moment when Sakaja walked on stage.

Sakaja however, responded back and said that; "My opponent is used to head starts and so I wanted to give him an opportunity and we are here."

Things kept unfolding and Igathe accused Sakaja of lacking integrity while citing that his degree was fake.

Igathe then directly asked Sakaja to confirm whether his name was indeed what he claims to be.

The exchange degenerated when the host and KTN news anchor and editor Zubeida Koome asked Sakaja to confirm his name.

Sakaja lost his cool and had a heated exchange asking Zubeidah to focus on the debate rather than asking such questions.

Zubeida: is your names Sakaja?

Sakaja: Is your name Zubeida?

Zubeida: I'm the one asking the questions.

Zubeida: Just tell us if your name is Sakaja.

Sakaja: Who did you invite?

Here is what Kenyans are saying online;

Sam Samoei: "Zubeidah is too pedestrian, gets in her feelings most times. She did that with the DP now Sakaja. She deserved that."

Bounty Hunter: "Emotional intelligence is key to leadership and management so that you don't make irrational decisions. Zubeidah's question was to test that and he failed big time."

Heisenberg: Zubeida Asking “Is your Name really Sakaja” will go down as the Most Stupid Question asked by a Githeri Journalist #NairobiGovDebate2022.

Robert Alai: Zubeida gave Sakaja a lifeline in that debate with the lame “is your name Sakaja” line. Rigged debate! #WalaiNiAlai.

Sakaja arrived 20 minutes past 8 pm, the time the debate started.
Politics
3 weeks ago

The gubernatorial debate will be aired on Mpasho, The-Star, and RadioJambo
Politics
3 weeks ago

Sakaja is the current Nairobi Senator and an aspiring Nairobi Governor.
Politics
1 month ago
WATCH: For the latest videos on entertainment stories