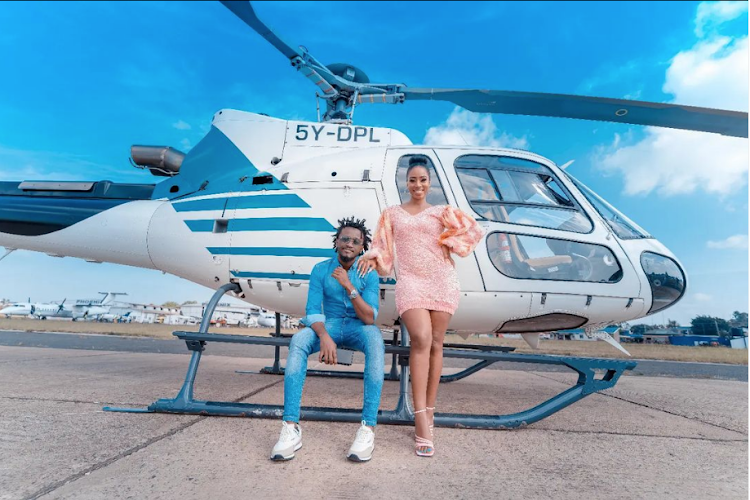 Bahati with Diana Marua in a file photo
Image: Instagram

Diana Marua is ordinarily a very patient person, but not with a fan who brought up the Mathare MP issue involving her husband Bahati and ODM lawmaker Edwin Sifuna.

The fan took to Diana's social media pages to comment about the ongoing drama involving Azimio and Jubilee's fight over who will represent the Mathare constituency in the coming elections.

Diana has been graceful enough to disregard Sifuna's mocking remarks to Bahati that he would prefer to deal with her than the whinny Bahati.

She continued to publish on her regular influencer schedule and even released a new video on her YouTube channel while ignoring the hubbub going on around her husband.

However, one supporter urged her to speak out about the shady political conflict that Bahati was embroiled in and into which her name had been linked.

Diana posted a no-hands challenge video featuring her sisters and the fan took the opportunity to joke about the video as well as ask about the Bahati-Sifuna online beef.

"Wewe cheza na mzee amechezwa. (You keep playing and your man has been played)," a fan joked.

How @BahatiKenya is being treated in the political arena is a reflection of the systems world view on youth and leadership. The young voters are watching and taking notes

In the mudslinging exchange between Bahati and ODM Secretary General Edwin Sifuna, Diana's name was also brought up.

The surprise disclosure that Anthony Oluoch, the incumbent and campmate of Bahati of Azimio, had been given preference over Bahati's political campaign came from Sifuna.

After Bahati's news conference, during which he urged Sifuna to avoid Jubilee Party politics and the Mathare contest, Sifuna tweeted a video of himself speaking with a Jubilee Party organizer for Nairobi, who confirmed that the party had dropped its candidate in favour of the ODM candidate.

Sifuna took advantage of the occasion to insult Bahati and also bring up his wife Diana.

Some online fans claimed Machachari actor wants to be funded by older women.
Entertainment
1 month ago

Diana Marua warned that Yvette would get another child for Bahati

Diana Marua and Yvette have become great friends over the past two years
Entertainment
1 month ago
WATCH: For the latest videos on entertainment stories