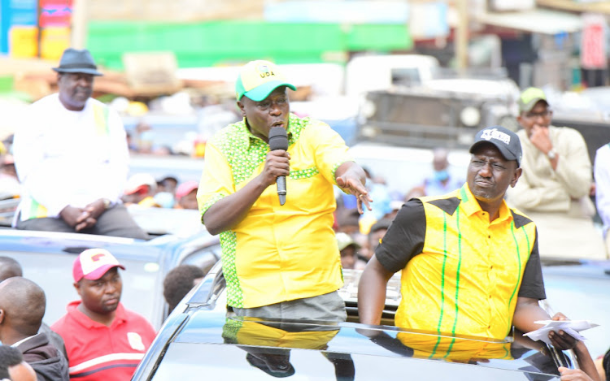 Rigathi Gachagua, Kenya Kwanza's running mate for president, declared on Tuesday that once they win the August elections, he will be able to access his frozen funds.

Gachagua declared that he would use the funds to construct a luxurious home.

The MP claimed his new home will feature a nyama choma base for males and porridge for women who visit his wife while speaking in Mathira during the political gathering.

"You are aware that the government has frozen my account. I'll get my money back when we win the election, then I'll come to Kieni and build a house so you can come and see me. I'll construct a nice residence, as well as a nice location for men to grill meat and drink what we drink as we talk," Gachagua said.

"We'll have a pleasant spot set aside for the ladies, where they can visit the husband's wife while sipping porridge and dancing."

Gachagua's three personal accounts at Rafiki Microfinance Bank were suspended in May 2020 due to accusations of money laundering.

Gachugua was under investigation for allegedly conspiring with Nyeri county and state department of irrigation officials through his businesses and close friends to obtain money thought to be the proceeds of crime.

Senior resident magistrate Muthoni Nzibe granted ARA's request and ordered all accounts to be frozen for a number of days, preventing Gachagua from doing any transactions.

Terence Creative apologizes after viral video of him eating while driving

Zari also spoke about her stint on the Netflix show Young, Famous and Rich. Without giving spoiler alerts, she hinted that a second season is ...
Entertainment
7 months ago