• Debates on the validity of his papers emerged hot on the heels of remarks made by Deputy President William Ruto who questioned their authenticity.

• While defending the degree certificate of Senator Jonshon Sakaja, Ruto said Raila has nothing to show as evidence that his degree is legitimate. 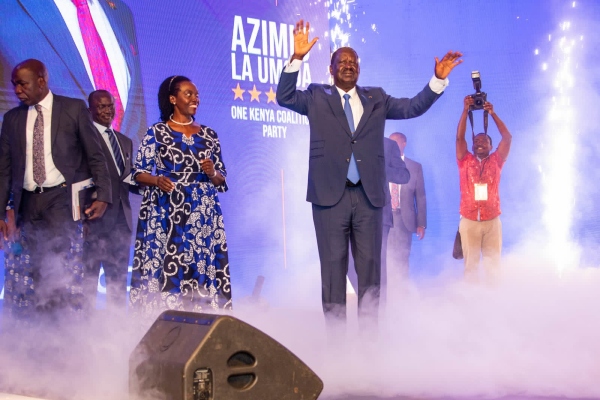 Debates on the validity of his papers emerged hot on the heels of remarks made by Deputy President William Ruto who questioned their authenticity.

While defending the degree certificate of Senator Jonshon Sakaja, Ruto said Raila has nothing to show as evidence that his degree is legitimate.

The Star has, however,  established that the ODM leader features among the 100 most notable alumni of Germany’s University of Leipzig alongside global personalities like former Germany chancellor Angela Markell who tops the list.

Raila appears at position 41 on the directory which features famous graduates and former students and research and academic staff of the University of Leipzig.

By aggregated alumni prominence, the university is ranked 62nd globally, 20th in Europe, and 6th in Germany.

Raila is described on the Leipzig alumni directory as a Kenyan politician, presidential aspirant, businessman and former Prime Minister.

He also recognized as havimg served as Lang’ata MP, energy minister, and Minister for Roads, Public Works and Housing.

The list also recognises his 2018 appointment as High Representative for Infrastructure Development at the African Union Commission.

A look at Raila’s autobiography shows that he spent two years at the Herder Institut, a part of the philological faculty at the University of Leipzig in East Germany soon after leaving Maranda High School 1962.

The biography further shows that Raila received a scholarship in 1965 at the Technical School, Magdeburg (now a part of Otto von Guericke University Magdeburg) in the the then German Democtratic Republic (GDR.)

A document seen by the Star shows that Raila graduated with a degree in Metal Process Engineering from the university and obtained an aggregate grade of “Good”.

His biography shows that in 1970, he graduated with an MSc (Masters of Science) in Mechanical Engineering before returning to Kenya the same year.

Ruto, however, thinks otherwise. The DP challenged the Azimio candidate to show proof that he is, indeed, a university graduate.

"Where did he school, what, with who, who taught him? You cannot answer all that yet you are telling us he has a degree."

His remarks were in defence of UDA Nairobi gubernatorial candidate Johnson Sakaja whose degree from Team University in Uganda is under probe over authenticity concerns.

A petitioner filed a case with the IEBC claiming a Bachelor of Science in Management degree was forged. Dennis Wahome claims it was printed on May 29, 2022.

Sakaja, however, maintains that he studied and graduated from the university on October 21, 2016.

Ruto echoed his sentiments that “the deep state”, and in particular President Uhuru Kenyatta, was out to block his ambition of governing Nairobi county.

“The deep state and system are making calls all over including the Uganda Statehouse wanting to stop Sakaja from being Nairobi Governor,” Ruto said.

“I am telling you Jubilee leaders, leave alone Sakaja, he has enough certificates. If there is someone with questionable certificates, it is the Azimio Presidential candidate,” he added.

Other than Sakaja, former Transport CAS Wavinya Ndeti’s academic certificates are also under scrutiny by the IEBC Dispute Resolution Committee.

A verdict on Ndeti’s case is expected on Saturday while Sakaja will know his fate on Sunday.