Zipporah Kittony has shared details of her beautiful ceremony and honeymoon

• Zipporah joins a list of prestigious Kenyans to launch a memoir. 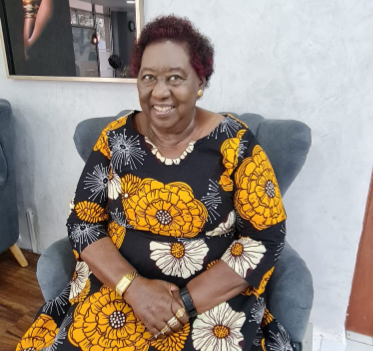 The details were shared by the proud son Kiprono Kittony on his Twitter.

He shared a beautiful picture of his mother Zipporah and captioned the exciting moment.

Zipporah has meanwhile opened up about her wedding and married life.

Speaking to the Nation newspaper in an interview titled, Zipporah Kittony: Growing up with Moi, his chapati cooking skills and generosity, Wednesday, June 8, Mrs Kittony opened up about her marriage.

"I met and married Paul Kittony in the most uncharacteristic of ways. I had just finished secondary education at Kapsabet Girls High School and was teaching at Kapropita Primary School. Paul was the headteacher at the neighbouring Kabartonjo Primary School in Baringo County."

Mrs Kittony also spoke of her fear of getting married and the jitters ahead of the ceremony.

"About halfway to the altar of the church, all the jitters, stage fright and anxiety had faded partly with the wild ululations and I simply thought, wow! This is the day, let’s do it! When we reached the church altar, my father presented me and all other ceremonial steps followed."

Her wedding was the highlight of the sleepy town, according to her account of the big day

"It was a formal but big and unforgettable ceremony by the standards of the village. Eunice Bomett, sister to Lenah Moi, the wife of Kenya’s second President, Daniel Arap Moi, was my best maid and the best man was Wesley Chesire."

After she calmed down and took her vows, next for all newlyweds is the honeymoon.

But their plans to have a blissful time were cut short. She describes the sad moment.

"My brother, Reuben Chesire, who was a District Officer for Kinango Division in Kwale District with the colonial government, made plans for our honeymoon at the Coast, a place I had looked forward to visiting. We left the village by bus for Nakuru and onwards to Nairobi for our honeymoon. We spent our nuptial night at Beacon Hotel next to Jeevanjee Gardens in Nairobi, a five-acre open green space in Nairobi’s Central Business District sandwiched between Muindi Mbingu Street, Monrovia Street, Moi Avenue and Moktar Daddah Street.

"I had packed our clothes and other personal belongings in a wooden box, which I reluctantly balanced on my head. At the time, suitcases, as we know them today, hardly existed.

It was made of a rigid wood frame, brass lock and latches, inside leather straps and pockets with a cloth lining and solid leather caps or brass at the corners.

It was bulky and heavy.

The next morning, my husband asked me to accompany him to the National Museums of Kenya to unwind after a gruelling few days before our big day.

I could not cover the distance on foot.

The heavy wooden box on my head ruined his rapid pace.

It was frustrating and made me give up on the trip. I was tired and uncomfortable and eventually asked him to take me back home.

That is how our honeymoon trip to the museum and the Coast was aborted. We returned to Baringo."

Sharn Mundia got candid about marrying at a tender age and not having thing figured out
Entertainment
3 weeks ago
WATCH: For the latest videos on entertainment stories