She said this at the Kenya Kwanza Women charter conference

•The conference was held at the Nyayo Stadium 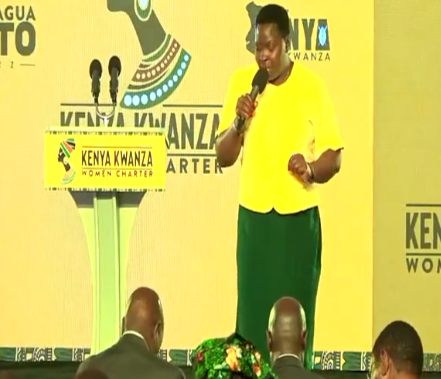 A female pastor has amused Kenyans after making a major blunder when praying at a Kenya Kwanza political rally.

The female pastor mistakenly referred to Kenya Kwanza as Kenya Kwisha during the opening prayers at the Women charter conference on Friday at Nyayo Stadium in Nairobi.

Pastor Wairimu realized her mistake and went ahead to correct it, much to the amusement of the audience. she then proceeded to bless DP William Ruto and his running mate Rigathi Gachagua who graced the event.

Kwisha is a Swahili word that means 'finished' or 'the end'.

This is in contrast with what Kenya Kwanza is aiming at in regard to the August polls.

The DP is expected to sign the charter that will give women an upper hand in his campaigns.

Ruto unveiled the league last Sunday in what pundits say is aimed at neutralising the Azimio wave created by the nomination of Martha Karua as Raila Odinga's running mate.

The Karua effect is said to have excited the womenfolk and reduced Ruto's fortunes, especially in Mt Kenya.

In his address to the Kenya Kwanza Women's League, Ruto said he enjoys the support of more women voters and he promised to support their ambitions.

"I am not a prophet but I can predict that Kenya Kwanza will produce the most number of elected women governors in the next government," he said, amid cheers.

"There's testimony that in the next 13th Parliament, to demonstrate that Kenya Kwanza is the place of women, even before the election we have a woman who has been elected as woman rep from Kericho County, Beatrice Kemei who is unopposed woman representative," Ruto added.

The Safaricom CEO Peter Ndegwa responded to the billboard. Not on email. No. In kind.
Lifestyle
2 weeks ago