• "Women do support each other. I have seen the immense support of so many women in my journey. A journey that isn’t mine alone, but each one of us collectively." - Martha Karua 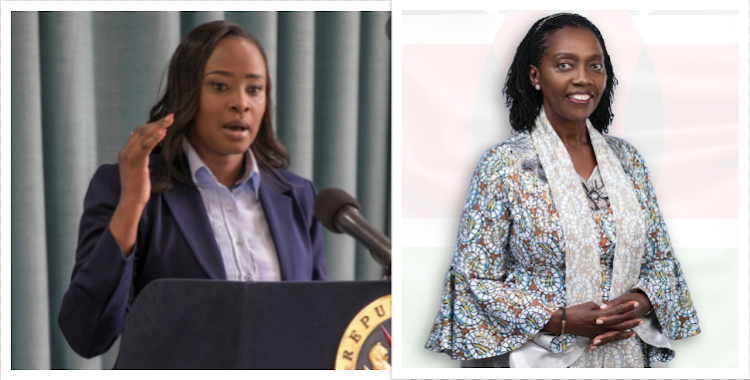 Statehouse spokesperson and Head of President's Strategic Communication Unit (PSCU) Kanze Dena was at the forefront of celebrating a fellow woman leader.

Kanze was addressing women from Mombasa who are part of the Maendeleo ya Wanawake movement.

She took time to praise Azimio's running mate Martha Karua - the aspiring vice president - saying she has ushered in a new era.

Karua has crashed and shattered the glass ceiling set for women by a society that dictates their place is in the kitchen being subservient.

Kanze said that era is over and it will never make a come back.

Addressing the crowd she said, "They have gotten used to seeing us with big sufurias in the kitchen making pilau."

Commenting on Raila's decision to select Karua as the running mate on the Azimio ticket, Kanze termed the move as a game-changer

Kanze continued, "This time around, we have wheels propelling us to success and higher offices. We are now taking lead in matters of development."

This comes as Uhuru had last week during his Madaraka Day speech urged the electorates to consider the Azimio presidential candidate.

Karua tweeted about his ongoing campaign saying, "Spent the morning with a group of women in business from various industries. Women do support each other. I have seen the immense support of so many women in my journey. A journey that isn’t mine alone, but each one of us collectively. Indeed the future is female."

Adding, "When women work and do business, the economy is more productive and diverse. Azimio will achieve this by ensuring women are equal players in the markets, have access to decent work and productive resources, and participate in decision making."

"I was a waitress for some years and I never knew what was going to come off my life," Kanze Dena
Entertainment
7 months ago

Kanze Dena celebrates herself in poetic post on 42nd birthday

Kanze says she is proud of the woman she has turned out to be.
Lifestyle
9 months ago

Kanze said her mum pushed her to pursue Journalism even though she did not like it.
Entertainment
1 year ago
WATCH: For the latest videos on entertainment stories