Murathe-Uhuru will not campaign for Raila, Karua ticket

Murathe said Uhuru is ready to hand over power to whoever will win the presidency in the August 9 polls.

•Speaking on Sunday, Murathe said Uhuru is ready to hand over power to whoever will win the presidency in the August 9 polls.

• He further said that Uhuru will not hang around after August elections unless there will be a run off. 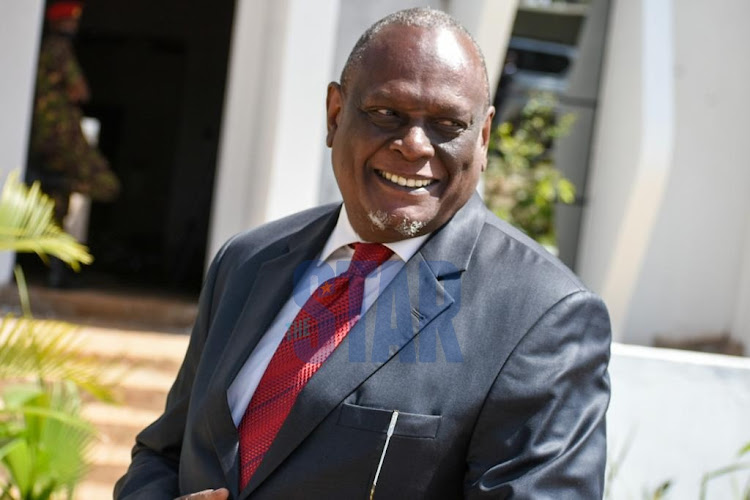 Speaking on Sunday, Murathe said Uhuru is ready to hand over power to whoever will win the presidency in the August 9 polls.

Murathe said the President will assume his role as Head of State and Commander-in-Chief until the election is held on August 9.

He further said that Uhuru will not hang around after the August elections unless there will be a runoff.

"You don't expect him to hit the ground running that is why now you find it is Martha and Raila. They are both on the ticket.

"Uhuru is not on the ticket. He will be going home in the next 80 days and he has to oversee a peaceful transition and peaceful election. He has stepped into his shoe of being the President and Commander-in-Chief," Murathe said.

Contrary to this, Uhuru's allies say that he will hit the ground in June to campaign for ODM leader Raila Odinga.

It is reported that he will be commissioning projects in the region and will also woo voters to back Raila and his running mate Martha Karua.

Kieni MP and Jubilee Director of Elections Kanini Kega told Nation that Uhuru will pitch tents in the Mt Kenya region in June and July for campaigns.

He said the schedule for the tour will be unveiled in due course even as it emerged that the tour will come after the Madaraka Day celebrations.

Kega told the daily that the tour will begin from Nyeri before proceeding to the rest of Mt Kenya counties.

Sharing a photo of himself alongside his mum George captioned,“When the time is right.@MarthaKarua.”
Politics
1 month ago
WATCH: For the latest videos on entertainment stories