• Jacob Ocholla Mwai claims that he is Mwai Kibaki's son and not his brother.

• Ocholla Mwai claims that he was barred from visiting Mwai Kibaki while he was admitted at the hospital during his illness. 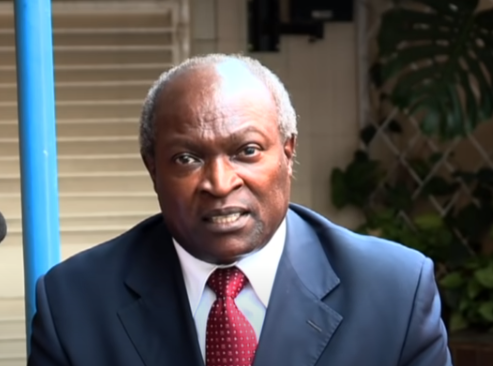 Jacob Ocholla Mwai, a man claiming to be the firstborn to the late Mwai Kibaki has thanked Uhuru Kenyatta for giving his 'dad' a decent burial.

Speaking during an interview with The Standard he said,

"I wish to sincerely thank Uhuru Kenyatta for the decent burial he extended to my late father the late Emilio Mwai Kibaki. I would wish to convey my condolences to the family, I share in this grief."

He says he has tried contacting different prominent personalities whom he thought could help.

"I have tried to solve this. I went to the extent of contacting individuals who I knew could help. I contacted Cardinal John Njue, I did so because my late father was a staunch Catholic and I thought the church would help.

I also visited the Presidents office and they promised to get in touch with me but they never did, that was three years ago. I also contacted Willy Mutunga."

"I went to Othaya and talked to my aunt Waitherero. I want to specify that I am not the brother of the late President, I am his son.

I have been in the picture, I am well known to the GSU guards at his offices, every time I went to visit him I went with my son and the driver. I did make attempts to visit him in the hospital but I did not get any access, the CEO of the hospital refused to."

Giving a bright detail of his childhood Ocholla shared,

"I was born in 1960, July 22nd in Kaloleni. I grew up knowing I was Luo, I did not know I wasn't. The person I called dad died when I was 21. A year after his death my mum then told me that the man who had died was my adopted dad.

She introduced me to my biological dad after a month, the former President was a very common person to me. I was raised in Karen, and when I saw him for the first time my mind was disturbed because I did not know if he was the one or not. My mum confirmed to me that Kibaki was indeed my dad."

"Kibaki told me he did not want me to hear of my roots from the people. It was not easy for me to grow up speaking Luo only to learn I wasn't. I am who I am today because of my adopted father.  After that, I met dad several times, and he assured me I would get my share of what I deserve."

To those asking why he has waited all these years, he answered,

"I have gone to three law firms to get my recognition, I went to my aunt (Mwai Kibaki's sister) but she told me she could not help as she did not have access to him."

Do you believe that Ocholla is Kibakis's son?

Beware of fake accounts in my name - Jimmy Kibaki warns

Jimmy disassociates himself from Kenya Kwanza
Politics
1 month ago

The transformer pole was erected around 50 meteres away form Mwai Kibaki's homestead.
Politics
1 month ago

Sean Andrew has been making headlines after he paid tribute to his late grandad, president Mwai Kibaki.
Lifestyle
1 month ago

Allan Makona's behaviours at the state house and at the Nyayo stadium shocked the family asking the government to release him adding that the family ...
Exclusives
1 month ago
WATCH: For the latest videos on entertainment stories