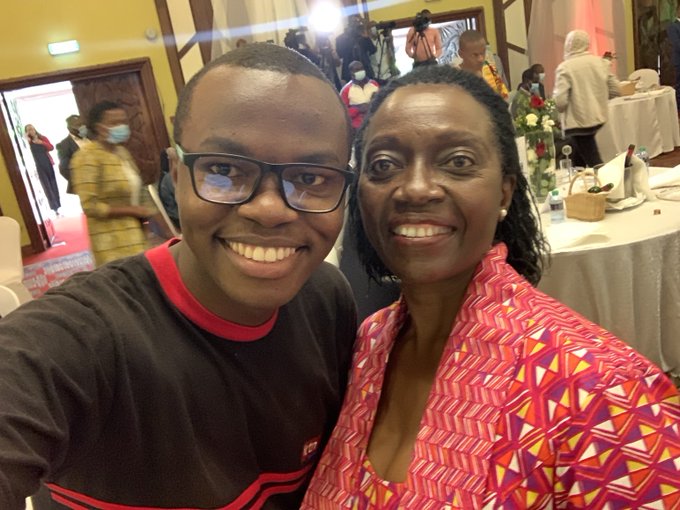 A lot has been said about Raila’s Odinga’s running mate Martha Karua, but away from politics, the Iron Lady is a doting mother and a grandmother.

Karua who is a divorcee is a mother of two. She has always kept her family away from social media but every once in a while she gives the public a glimpse into it.

With my son Dan at the luncheon to honor the Chief Justice Martha Koome ⁦@Kenyajudiciary⁩ pic.twitter.com/AUnZh2I8uq

George was among people who took to their socials to congratulate Karua after she was chosen as Raila Odinga’s running mate in the 2022 general elections.

Sharing a photo of himself alongside his mum George captioned,

“When the time is right.@MarthaKarua.”

Below are things you did not know about George;

–He is a reporter with KTN

He joined the company as an intern in 2017. He has risen to the ranks thanks to his dedication.

–Maringa worked for the African Virtual University (AVU) in various capacities within the Educational Technology and Learning Resources (ET&LR) Unit.

–Maringa holds a Degree in Mass Communication from the Jomo Kenyatta University of Agriculture and Technology (JKUAT).

–He is also an Alumnus / Fellow of Finland’s Foreign Correspondents’ Programme.

George believes in defending the public interest at all costs. He is passionate about minorities' rights and has reported on the Ethiopian Refugee crisis in the North-Eastern border town of Kenya, Moyale. His reportage saw a host of humanitarian agencies (UNHCR and The Red Cross) respond to the crisis.

Apart from journalism, he is keen on his musical talent. If he is not chasing a story, you'll find him singing in the choir. He hopes to tell African stories on a more international platform and he looks forward to being a lifelong friend of Finland!

How I unleashed the Azimio song that fast - Ben Githae

Ben Githae explains how he knew Raila Odinga would select Martha, because of the RaoKa tagline used in the just released song.
Exclusives
1 month ago

Sisterlocs are installed using a special tool and much smaller portions of your hair.
Politics
1 month ago