Lucy Natasha describes Karua's appointment as a milestone for women

• Martha Karua was named as the official running mate of Baba on Monday at KICC.

• Lucy Natasha termed it as a 'major milestone for women in Kenya!' 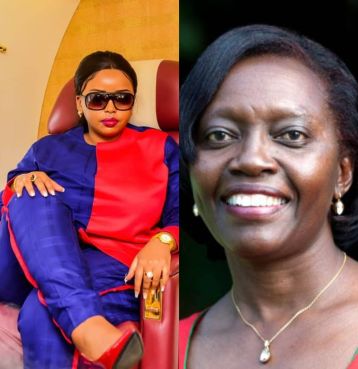 The seasoned politician and Narc Kenya party leader, was named as the official running mate of Baba on Monday at the Kenyatta International Convention Centre (KICC).

Touched by Raila's move to settle for a woman leader as his preferred running mate candidate, Lucy Natasha congratulated the former Gichugu MP and termed it a "Major milestone for women in Kenya!"

She wrote, "A nation that empowers women gets transformation in both economic, social and political spheres. Congratulations Hon. Martha Karua this major milestone for women in Kenya!" 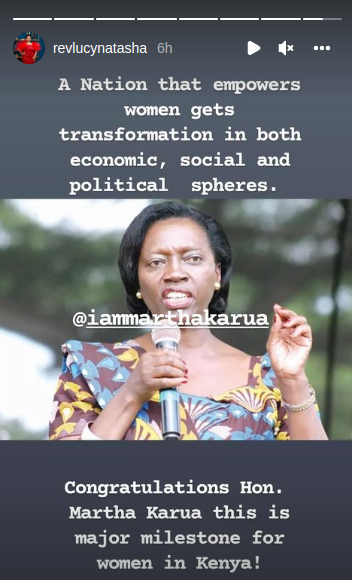 Other female leaders who congratulated Karua include Nairobi Women's representative, Esther Passaris who assured Kenyans that they are in safe hands.

She wrote, "Thank God for answering our prayers. Just like Mandela used the Springbok rugby team to unify his country, Baba chose SC Martha Karua to unite Kenyans of all walks of life. A true Mandela Moment. We're in safe hands."

Posting a photo of Raila and Karua, Charity Ngilu described Karua as a reformist. She wrote, "SUPER TICKET! Reformist and unwavering. Congratulations my dear sister @MarthaKarua for this great honor. #RailasRunningMate."

Accepting the coveted role bestowed on her Karua said, "I thank the Azimio la Umoja selection panel for their thorough and transparent process in the selection of the running mate. I congratulate the other candidates and I’m indebted to them as worthy competitors."

Karua described her huge win as a moment for Kenyan women.

"This is a moment for the women of Kenya. It is a moment that my grandmother would have been proud of..." - Martha Karua
Politics
1 month ago

Martha Karua’s appointment as DP gives hope to our mothers, sisters, daughters and all Kenyan women
Politics
1 month ago

"Show us one election you have ever won before you hate another woman!" - and angry Kenyan asked Karen Nyamu.
Politics
1 month ago