• DP Ruto and Sakaja were serving rice and beans to the Primary School kids.

• Sakaja put emphasis on his dream to have all school-going children be provided with free lunch at school if he is elected Nairobi Governor in August. 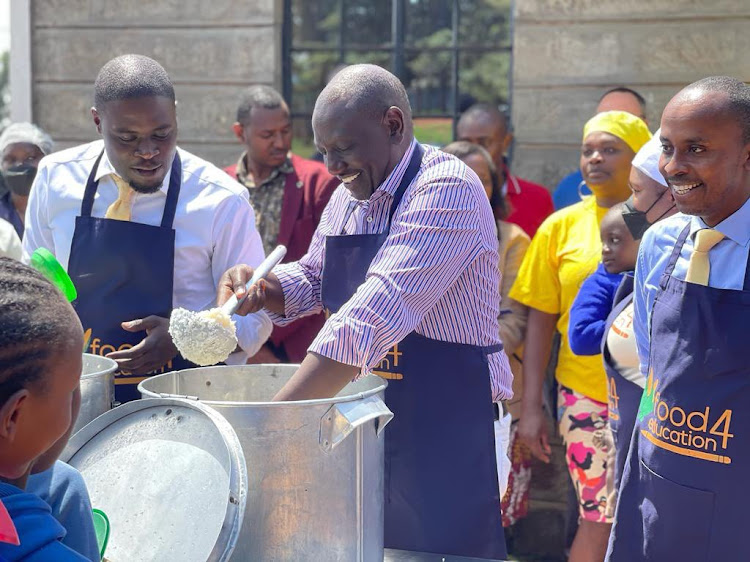 Deputy President William Ruto and Nairobi Senator Johnson Sakaja have been making rounds in Nairobi City as they campaign for the Presidential and Gubernatorial seats respectively.

On Wednesday, the duo together with other leaders in Kenya Kwanza coalition were at Mukarara Primary School in Nairobi.

There, Sakaja put emphasis on his dream to have all school-going children be provided with free lunch at school if he is elected Nairobi Governor in August.

"We will feed our children in all the public schools in Nairobi. I’m glad that today H.E @WilliamsRuto has seen firsthand in Dagoretti what this program entails and has committed to also include it in his National Manifesto. A city of order and dignity, hope and opportunities!" Sakaja shared.

"I remain grateful to @Food4Education for this selfless initiative to provide food daily for these school-going children."

He went on to thank Ruto for planning to have the food program as an agenda in his government.

To show their support for the program, DP Willian Ruto and Senator Johnson Sakaja became 'servants' at the Primary School.

They offered to serve lunch to the school children.

However, their actions have sparked both praise and rebuke from social media users.

While others praised them for 'servant leadership' others opined that the two are puylling the antic just to win the 'mercy' of voters in the upcoming General Election.

Here are some of the reactions to the photo.

@ Brian - "My question is, why just now? Consistency defines a person. You are what you have been 90% of your time."

@ Bryan - "They are just show casing Lunch 4 Students program in Nairobi that they will be launching if Sakaja wins....Kazi kwa ofisi Kumingle kwa ground."

@ Mnyika - "These are the “miracles” that happen when elections are around the corner followed by five years of indifference! It’s a familiar cycle isn’t it?"

@ King Samia - "This shows you who these guys really are,if they value public schools,why can't their children learn there? Why only come during election time? This theatrics should stop."

• She made reference to the Bible, 2 Kings chapter 2:19, where prophet Elisha purified unclean water using salt. • She said the purification process ...
Politics
2 weeks ago

I want to say that God is allowing us, these 3 months May, June , July continue to push in prayer,
Politics
2 weeks ago

MC Jessy proves you need loyal, moneyed friends in such a race
Politics
2 weeks ago
WATCH: For the latest videos on entertainment stories