• Her fiance said he wants them to get a baby girl

• Benito meticulously planned the request with one caveat 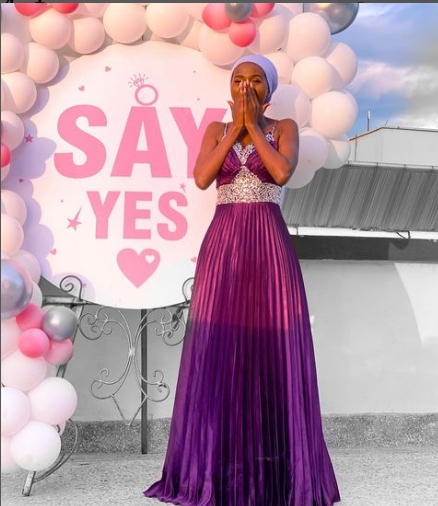 Akorino model and entrepreneur Carey Priscilla got the biggest surprise on Mothers day.

Her baby daddy Benito had planned to ask her to get baby number two, but she thought it was a marriage proposal.

In their latest youtube video,  Benito reveals that she had no idea about his plan.

Benito got Carey on the rooftop of the building that houses her salon, as she anxiously asked him what he is upto.

Benito also made sure Priscilla is blindfolded and guided to walk and stand infront of a banner indicating he will ask her to say yes.

When Priscilla's eyes were opened, Benito got on one knee, making her think it was a marriage proposal.

"Babe I love you so much you havr been with me Yo u have been my babe tumekula shida na wewe All I want is one thing na naomba tuu unipee. Najua umenipee mtoto lakini I just need another. I love you babe All I want is , will you give me another baby? Please say yes," Benito said.

He then told her 'please give me another baby please'. Please say yes babe.'

The model insisted that she wants Benito to marry her first before she agrees to have another baby.

"Remember I told you like I want a wedding before I get another baby?"

Benito assured her that he will treat her to a big marriage proposal in Dubai or somewhere else.

Pricilla argued that their son is still young and she is not ready to be a mother of two yet.

Benito promised to propose to her in a year's time, insisting that he wants them to have another baby, a daughter.

The model then accepted the proposal, saying the baby should be made when they are on a vacation.

Selina never thought she could date a mukorino.
Entertainment
4 weeks ago

Bensoul is expecting his frist child with a lady identified as Tiffany.
Exclusives
2 weeks ago

YY's girlfriend thought he would 'disappear' after she got pregnant

YY celebrated his baby mama for how strong she has been in their relationship.
Entertainment
2 weeks ago
WATCH: For the latest videos on entertainment stories