The woman was cheering DP Ruto

• She stood from her seat and started running towards the podium while cheering the Deputy President.

• The woman's journey was cut short when security officers who were seated just right in front of the podium stopped her. 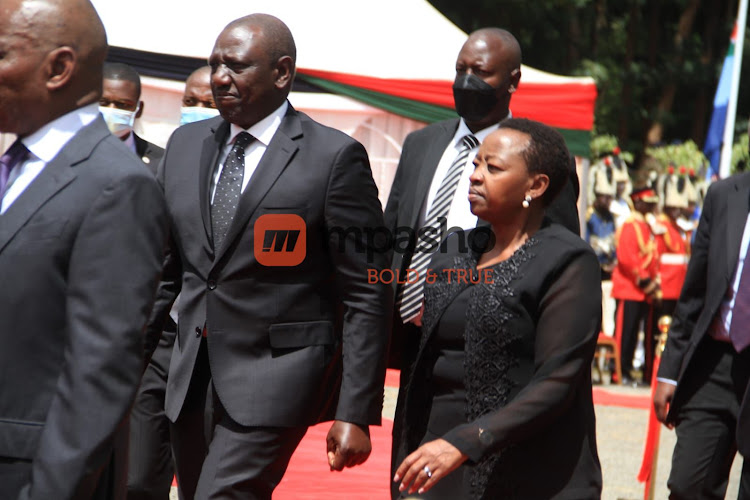 The final send off of former President Mwai Kibaki at Othaya has been marred by its part of drama.

After Deputy President William Ruto made his speech, an elated woman who was seated with other mourners could not hold her emotions.

She stood from her seat, and started running towards the podium while cheering the Deputy President.

The woman's journey was cut short when security officers who were seated just right in front of the podium stopped her.

The officers then whisked her away while the Deputy President watched.

A mourner running toward the podium as DP William Ruto spoke stopped and whisked away by security. #FareWellKibaki pic.twitter.com/il4aRgl6tw

On Friday, Mwai Kibaki's state funeral that was held at Nyayo National Stadium was marred with the same kind of drama.

There, a man named Allan Makana fouund his way to the main podium just after President Uhuru Kenyatta's speech.

The man, who had earlier claimed to be Kibaki's grandson approached Nyeri Archbishop Anthony Muheria, seeking an opportunity to address Kenyans.

The Archbishop swiftly contained the man who was to be whisked away by security officers.

“He is a son of our nation who is emotional at the loss of a President, treat him well,” the Archbishop said before proceeding with the mass.

Speaking before the burial service at Othaya, Muheria reiterated the need to have mercy on Allan Makana.

"It is an incident that happened and we do not foresee these things but we handle them as the holy spirit guides us at the moment. I think it was a young man who was a bit emotional and I really hope that he is looked upon with mercy and someone attends to him," he said.

'You Jimmy, you like going out and coming home, at 2 or 3 am in the morning...It is only crooks and vagabonds that go out parading at all hours of ...
Politics
3 weeks ago

The reason why Mwai Kibaki will not be accorded a 21 gun salute is that at his death he, was not a sitting president as he had long retired.
Politics
3 weeks ago
Watch: President Mwai Kibaki's funeral proceedings