•  Mwai Kibaki also had a soft spot for the Kenyan people, he grew up as a son of a peasant farmer he knew the struggles they experienced. 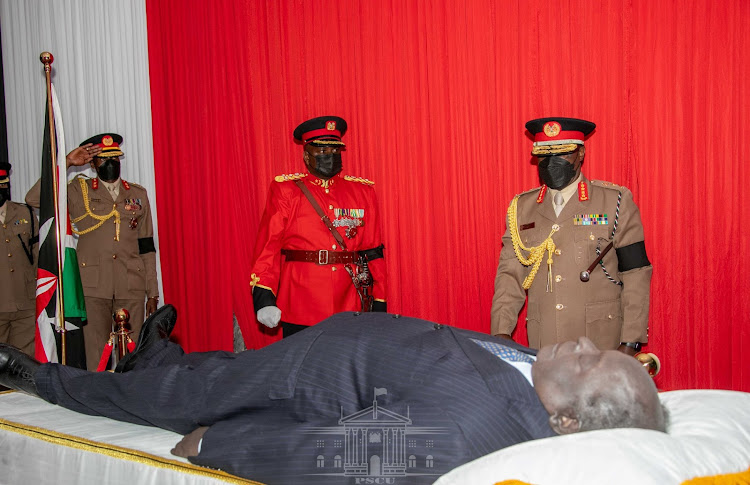 The late president Mwai Kibaki was a man of very simple taste.

From the way he lived his life to how he will be buried, Kibaki was not one to flaunt a lifestyle of luxury and excess or wastage.

In one of his last interviews about his life in a tribute book titled Mwai Kibaki: 50 Years Of National Service, he explained how his childhood shaped the man he was.

“My parents were peasant farmers. They engaged in subsistence agriculture which involved rearing cows, goats and chickens as well as cultivating food crops, especially maize, beans, vegetables, yams, potatoes and tomatoes among other crops.

They also engaged in trade where they could sell some of the agricultural produce at the village market. Childhood Under the watchful eyes and caring hands of my parents as well as siblings, my childhood was enjoyable.

I enjoyed playing with other boys in our neighbourhood while rearing cows and goats or while chasing after antelopes in the woods,” Kibaki reminisced.

His thoughts on money and wealth are very illuminating, "Money is important but wealth creation is even more important. We must make money, but this should be done through hard work, not shortcuts."

Kibaki added, "It is also important to appreciate that money is a medium of exchange. It should not, therefore, be accumulated for its own sake. Once the money is made, it should be invested."

It is with that in mind that you can understand why Kibaki was not showy with his wealth and instead reinvested his money to build wealth.

Kibaki also had a soft spot for the Kenyan people, he grew up as a son of a peasant farmer he knew the struggles they experienced.

That is why one of his last wishes was that his body be transported back to Othaya by road so that the people can pay tribute to him for the last time.

The late's remains were draped in the national flag, loaded in a hearse carriage and escorted by military officers in a presidential-like procession.

The body will later be loaded into a gun carriage about 400 metres to the burial service venue.

Kibaki's family is part of the procession. Officers in the rank of a cornel will be the pallbearers.

The body is expected to arrive at Othaya approved school the, venue of the burial service, by 10 am.