• Mwanaisha Chidzuga says the party chose to give her a direct ticket since she was the most popular candidate for the position.

• She added that she will ensure that all the resources are unveiled in the rural areas of the constituency. 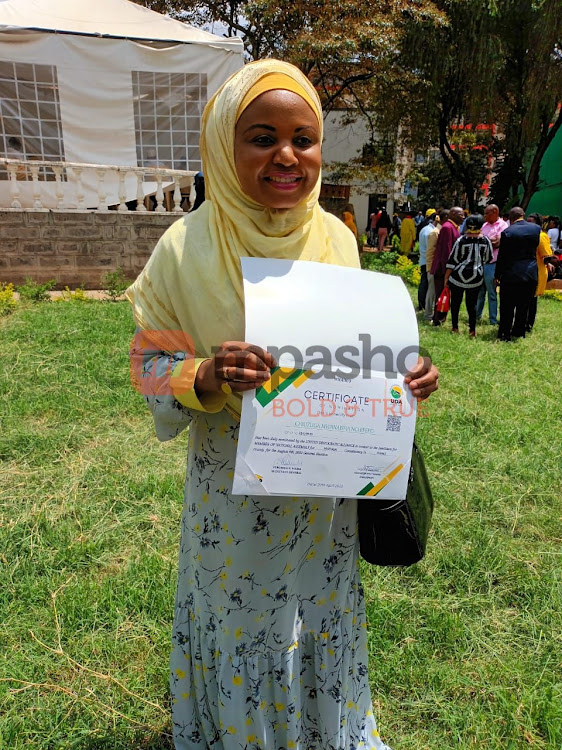 Ex-news anchor, Mwanaisha Chidzuga, has been given a nomination certificate by the UDA Party in the Matuga Constituency race.

On Wednesday, Mwanaisha Chidzuga and other nominees in various posts were at the Hustlers Centre to receive their certificates from party secretary-general, Veronica Maina.

Speaking to the press, Mwanaisha said the party chose to give her a direct ticket since she was the most popular candidate for the position.

"I was the most popular candidate, so the party decided that there is no need to do nominations in Matuga Constituency because their candidate is the most popular. So they gave me a direct ticket. So today i was given the certificate and unveiled officially," she said.

The ex-journalist went on to share her plans for Matuga constituents.

"I am a youth and a woman, I represent women and youths who are the majority at Matuga Constituency. My focus is on youth employment...many of our youths stay at home because they lack employment...they are involved in unfamiliar activities. I assure them that resources in Matuga will be used to benefit them, giving them opportunities for self-employment," Mwanaisha Chidzuga said.

She added that she will ensure that all the resources are unveiled in the rural areas of the constituency. Mwanaisha plans to devolve the CDF fund to get to every part of the village.

Before her nomination by UDA Party, Mwanaisha Chidzuga was competing for the seat with her brother Hassan Chidzuga. Then, Hassan said he hoped to have a talk with his sister to find the way forward.

"I am sure she will come, and we will talk as a family. Everyone is saying what they want, we are not competing nor fighting. It's just that she has declared, and also as her elder brother, I have also declared," Hassan said.

Reports on whether her brother decided to step down are not clear yet.

Watch-Why Refigah won't use any Kenyan artist for his campaigns