Gabu is in ANC while DNG is in the UDA Party

• Gabu was issued a nomination ticket by his party leader Musalia Mudavadi.

• A face-off is expected between Gabu and DNG since both UDA and ANC parties are members of the larger Kenya Kwanza Alliance. 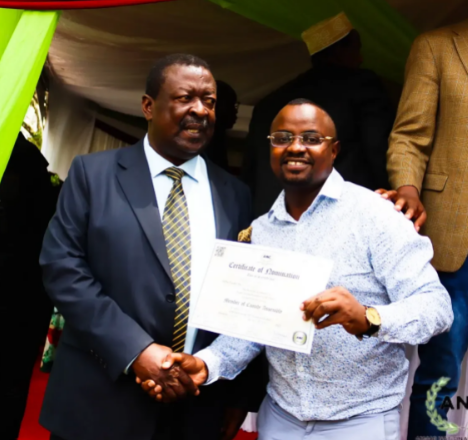 P-Unit rapper, Gabriel Kagundu aka Gabu Bugubugu, will be contesting for the Wooldley Ward MCA seat under the Amani National Congress party.

On Monday, Gabu was issued a nomination ticket by his party leader Musalia Mudavadi among other candidates contesting in various positions.

The rapper took to social media to thank his people for the support they have given him to get to that point.

"You have entrusted me with the responsibility of representing you as your candidate of choice for the MCA Woodley/Kenyatta Golf Course seat. I do not take this for granted and I am grateful for the far we have come as a team. Your support is everything. We are grateful to God for the favor that he has shown us during this campaigns," Gabu penned in a gratitude message.

He further expressed his confidence that he will clinch the MCA seat in the August General Elections.

Gabu will be contesting for the Woodley MCA seat with fellow artist, Davidson Ngibuini popularly known as DNG.

While DNG will contest on a UDA ticket, Gabu will be on an ANC party ticket.

A face-off is expected between the two since both UDA and ANC parties are members of the larger Kenya Kwanza Alliance. It will be interesting to see who blinks first between DNG and Bugu Bugu.

Veteran musician Julius Owino aka Maji Maji has taken his political ambitions to the next level by registering for life membership in the ODM Party.
Politics
10 months ago

Give Mbugua's wife the seat you offered me! Jaguar blasts Ruto