How the song Unbwogable propelled Mwai Kibaki into State House 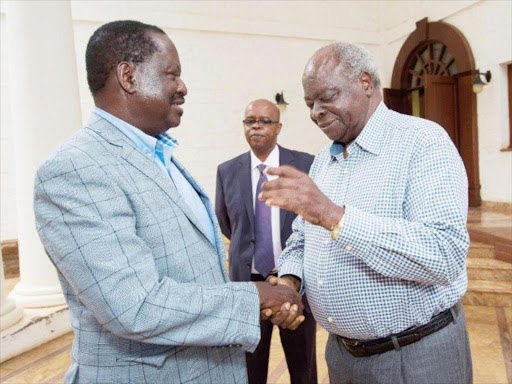 In 2002 the song Unbwogable by Gidi Gidi and Maji Maji was the anthem for the election campaign.

It was the campaign song that got Kibaki into State House, it whipped up the emotions of the masses and rallied them behind the two candidates.

In a past interview with Daniel Ndambuki, alias Churchill on his TV show, Gidi Gidi said that Narc Alliance members Mwai Kibaki, Raila Odinga, Charity Ngilu, and the late George Saitoti adopted the song to propel their campaign.

This development reportedly made the late President Daniel Arap Moi uncomfortable even as he drummed up support for Uhuru Kenyatta to succeed him, and he reportedly reached out to the budding artists.

He offered the duo Ksh 10 million.

"I did not write that song for political gain. I was singing it to challenge myself as I was going through several challenges at the time," Ogidi recalled.

"But it became a hit and politicians ran away with it. (Opposition party) Narc paid us Sh800,000 to use the song.

One day two men approached me and Maji, they introduced themselves as people from State House. They asked us to go and sing another song with a version that praises Kanu, in exchange for Sh10 million.

We consulted my uncle and he advised us to decline the offer," he said.

Kibaki won the presidency and ended up leading Kenya for two terms a total of 10 years.

He won the second term in 2007 through a highly contested race against Raila Odinga.

Kenyans have mourned his demise saying he is the best President Kenya ever had.

He will be remembered for his sense of humour and his professionalism.

Below are some of the tributes.

Myra Denousse: It's very painful...We'll never have another like him.

Cindy Carol: The best president we ever had. Rest in peace.

Grace Jeremy: May God comfort the family. He was the best President Kenyans have ever had. Rest in perfect peace.

Teresia Muturi: A great president we had. May he receive his reward in heaven.

James Mahinda: Great man he was, really great. Through him, the country was transformed. He will be greatly missed by many. May his spirit rest well.

The late president Mwai Kibaki was a man of very few words.But when he uttered them they made sense and they were memorable.
Politics
1 month ago
WATCH: For the latest videos on entertainment stories