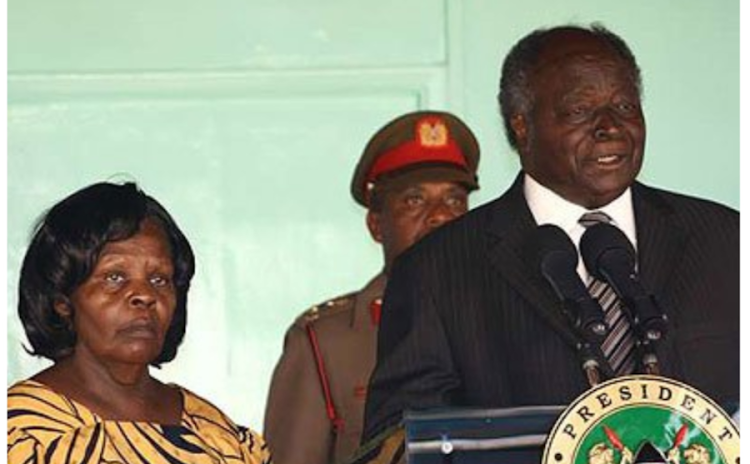 Cardi B with Offset(right) and Kibaki with Lucy(left)
Image: Courtesy

It was rare to catch the late Mwai Kibaki angry.

But in March 2009, Kibaki called a press conference to announce to Kenyans that he only had one wife and anything else people were hearing was propaganda.

"I want to state something that I want you to hold dear and permanently in your hearts. You know, and I know and everybody knows that I only have one wife.

Everyone in Kenya knows it but the media keeps repeating about me having another wife.

I want to make it very clear that I have only one dear wife Lucy and I do not have any other. The truth is known, I have only my four children.”

Adding, "Everybody who knows me and my family and how I live now I have one wife and they do not expect any diversion from that way of life.

I decided to make it public and appeal to you to listen to what I say and not to continue dispelling lies all over the place.

I can't keep repeating this same thing when the people in the media love to publicize lies. "

He threatened to go to court:

And we shall deal with him, no other way whatsoever; there is no genuine purpose for people wanting to spread lies about myself.”

Kibaki said he had gotten in a foul mood over people saying he had another wife.

President Kibaki urged members of the public and the media not to listen to lies from malicious people about the first family.

Mary Wambui had alleged that she and Kibaki were married, she insisted she was her second wife.

In a past interview with a local publication, Wambui said she had met Kibaki through his cousin.

“I met Kibaki a long time ago in Nanyuki, through his cousin who lived there.

Also, our paths crossed because I was a teacher and I would accompany the children to perform for the bigwigs during functions. Kibaki was a government minister then,” she said.

We commend Kibaki for standing by his wife, not many men would do that.

Mwai Kibaki shall be accorded a state funeral.
Politics
1 month ago
WATCH: For the latest videos on entertainment stories