• Jalang'o has claimed that rigging occurred in the ODM nominations.
• The hearing for the appeal will take place on April 19th 2022. 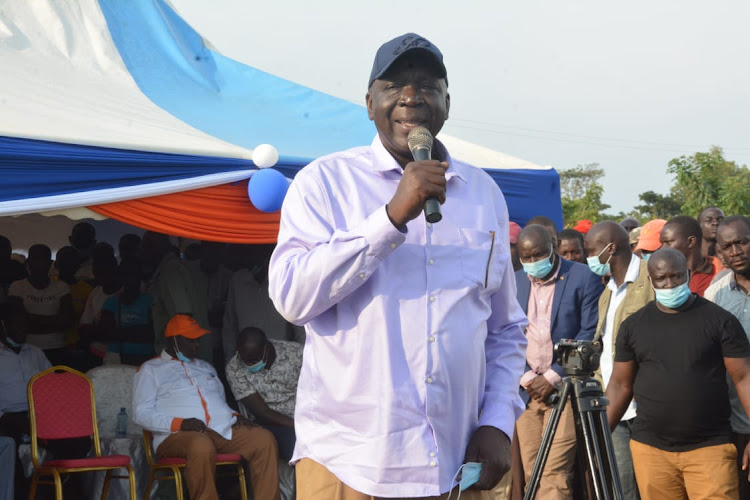 Dr Jalang'o Midiwo speaks during an event. He is the second son of the Midiwo family to seek the Gem parliamentary seat.
Image: DICKENS WASONGA

An aspirant who lost the Gem constituency seat at the ODM nominations on Wednesday has lodged his complaints before the party’s Appeals Tribunal.

George Jalang’o Midiwo now says that he was to emerge winner if the incumbent MP Elisha Odhiambo did not rig the voting process.

Hearing of the appeal is scheduled for Tuesday April 19 2022 and Jalang’o has asked his supporters to remain calm as the matter is being addressed.

“I know that the ODM Appeals Tribunal shall rule in my favour because I was poised to win,” he said.

Speaking to journalists Friday, Jalang’o said that he would have conceded defeat but he is not ready to do so because Odhiambo subverted the will of the people.

Jalang’o said that Odhiambo had colluded with some crooks in the party to illegally configure the electronic gadgets, to gain unfair advantage.

“The electronic voting was not foolproof. Most tablets were configured such that most did not start to count at zero as it ought to have been,” he claimed.

As the voting progressed, the rigging continued, with some kits being snatched and heaped with new voter information from inside balck Prados and Voxys.

The vehicles and their occupants, he said, had been commissioned by Odhiambo.

According to the politician, who is also the late former Gem MP Jakoyo Midiwo’s elder brother, the reigning MP bought ID numbers at Ksh1,000 across the constituency.

Also, he said that the electronic voting allowed for any member of the ODM from any part of the country to vote.

“The system was accepting any ODM member from anywhere, and it is wrong,” he said.

Further, he noted that the clerks were instructing people on how to click the gadgets to choose preferred candidates.

In the circumstance, Jalang'o said people, especially the elderly, were misled into electing Odhiambo.

Odhiambo, he claimed, had hired goons who unleashed violence on his (Jalang’o) supporters and innocent residents f Gem.

Jalang’o said that the weapons included a hand grenade, firearms and other crude weapons.

Twelve people have since been arrested by the police in Yala and shall be presented in court next week.

Himself, he recalled, some of the Prados barricaded his way in Akala market on the election day, just to intimidate him.

He accused the Orange party for lack of adequate preparedness to conduct the nominations in Siaya county.

“The party converged aspirants at the Siaya Township secondary school just a few days before the day that had been slated for voting. We ended up not training clerks,” he noted.

Jalang’o accused his competitor Odhiambo of hiring only his friends who are teachers from around the constituency to preside over the election.

“We have finally confirmed that Victor Maina, who served as the Siaya county Returning Officer, is Odhiambo’s very close ally,” Jalang’o said.

“In the chaotic atmosphere that the elections were conducted under, we believe that Elisha Odhiambo lost the election and I am the rightful winner,” Jalango said.

The nomination outcome revealed that Odhiambo had garnered 7,405 votes against Jalang’o’s 6,384; a difference of 1,021 votes.

He wants Odhiambo’s nomination nullified by the Appeals Tibunal.

Meanwhile, he urged the people of Gem to prepare and come out in droves to vote for Odinga on August 9 2022.

On Thursday, the ODM’s Gem nominee Odhiambo called on Jalang’o, who was his only challenger, to concede defeat and unite the people of Gem for the sake of development.

Jalang'o terms poverty as his biggest motivation.
Politics
1 month ago
WATCH: For the latest videos on entertainment stories