Just know the MP for Langata is Jalango!

•A comedian who left his lucrative job for a parliamentary contest is in tears after his party decided to hand his rival a direct ticket.

• Now, Jalango has responded to the blind piece.

Jalango has finally responded to a blind piece newspaper article that claimed he has been kicked out of the parliamentary race for the Langata seat.

The newspaper article read, "A comedian who left his lucrative job for a parliamentary contest is in tears after his party decided to hand his rival a direct ticket.

A group of elders, who led negotiations, said he joined the party only eight months ago and does not deserve the ticket. It is at this point that he realised it was no longer a laughing matter. He stormed out and mobilised his supporters to protest and disrupt the meeting. 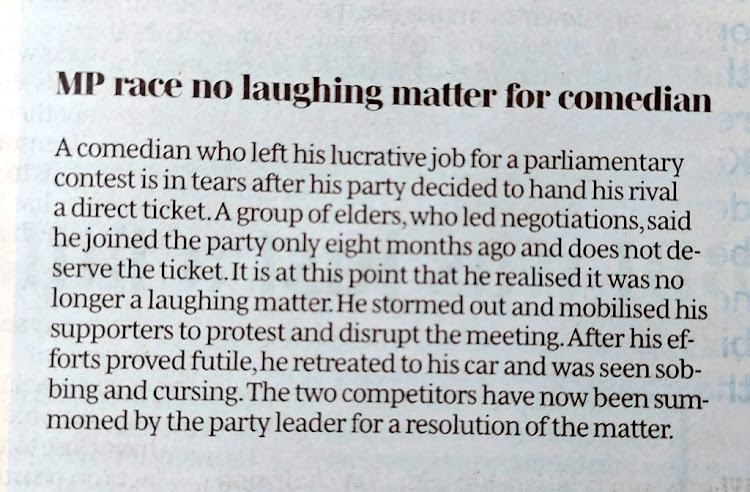 Newspaper article on a blind piece about a political aspirat's pain, that has gone viral

After his efforts proved futile, he retreated to his car and was seen sobbing and cursing. The two competitors have now been summoned by the party leader for a resolution of the matter. "

Now, Jalango has responded to the blind piece.

He said, "Bado (not yet). Just know the MP for Langata is Jalango."

Speaking during an exclusive interview with Mpasho, he said, "I have been made to sign a contract saying in case things do not go my way the door is always open for me to come back.

Jalango added, "He (Patrick Quarcoo) has mixed feelings about letting me go. He wants me to come back but he is also wishing me well. Radio Africa has always been home, If I get a chance to come back why not?

Watch the entire interview below.

Does Jalango have a plan b?

"There is no plan B, I have never had a plan B it is my boss who made me sign that contract."

Jalango has always spoken out about his dreams and it seems, that if he wants to be the Langata MP, he will work at that dream till it comes to fruition.

"Always go for your dream and not a salary. Sometimes there are dreams that cannot be matched by a salary, your dreams cannot be bought.

I do not believe there is someone who can be able to pay the equivalent of the dreams an individual has."