Why Millicent Omanga did not help Chips Mwitu seller, Kwamboka

'It was politically misinterpreted,' - Omanga

• Omanga's team visited Kwamboka at her workplace and gifted her an umbrella and aprons, all branded with her name. 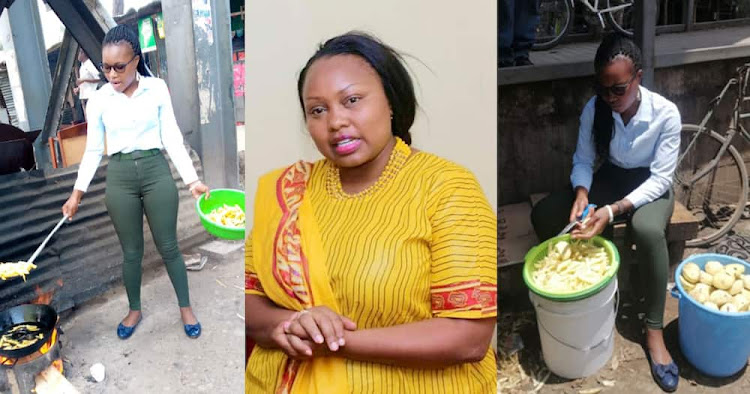 Aspiring Nairobi Women Rep Millicent Omanga made headlines last year after a chips mwitu vendor Beverlyn Kwamboka called her out for lying that she gave her cash money to boost the business.

During that time, Kwamboka a chips mwitu vendor in Donholm area has requested well-wishers to help her buy an umbrella to shield her from direct sunlight as she made her living.

Omanga's team visited Kwamboka at her workplace and gifted her an umbrella and aprons, all branded with her name.

Millicent Omanga then shared the photos on her social media stating that Kwamboka had been sorted.

"Bevalyne Kwamboka is now sorted. Umbrella, cash and stock to boost her hustle. Come shine or rain, she will not have to close her business. Now let's go eat those chips."

Kwamboka responded to the claims by shaming Omanga for lying to the public.

Kenyans on Twitter called out the politician for misusing the youths for her own gains.

Well, speaking to Massawe Japanni, she said the whole issue was politically misinterpreted.

"She asked for an umbrella. When my team took the umbrella to her they also bought potatoes for her to boost her business stock. I was not around with them," she said.

Omanga added that she wanted to help her but after the trend, she stepped down.

"I wanted to look for her but it was politically misinterpreted. I started seeing other people giving me other things and I stopped. My team did give her exactly whats she asked for."

Viral chipo mwitu vendor, Bevalyne Kwamboka, is now a graduate. The woman who went viral two months ago, graduated with a degree in Education from ...
Entertainment
5 months ago

In a tweet, KURA labeled Kwamboka's business as ‘illegal and an infringement to pedestrian rights.’
Lifestyle
7 months ago