• Musambi was commissioned as the UDA candidate for Kitui Central Parliamentary seat by William Ruto. 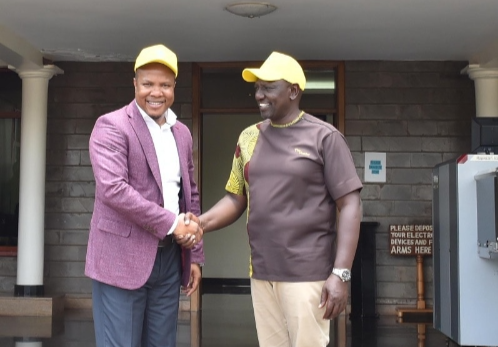 Ex-KBC TV host Bonnie Musambi has finally joined UDA. Musambi had earlier been assumed to be quitting the national broadcaster to go and start his own company but that seems to have changed.

In what seems to be a change of plans Musambi says he will be vying for the Kitui Central Parliamentary seat in 2022.

"I was received and commissioned by Deputy President William Samoei Ruto at his Karen residence, as the UDA candidate for Kitui Central Parliamentary seat, 2022.

This came after a series of consultative meetings with various leaders in the constituency, who unanimously advised me that with no doubt and by the grace of God.

Ruto will be the 5th president of the Republic of Kenya and only his agenda resonates well with ordinary mwananchi," he said.

Musambi resigned from the state-owned media house on February 9, given the constitutional requirement that aspirants should not occupy public office six months before the polls.

The revered journalist had served the station for 14 years by the time of his resignation.

There have been reports that Bonnie is eyeing the Kitui Central Parliamentary seat.
Entertainment
4 months ago

Bonnie Musambi is not going to drop the mic completely.
Politics
3 months ago