Wambui Wanjigi is drumming up support for her father

• Wambui Wanjigi urged Kenyans to support him to have a taste of how Jimi Wanjigi is a visionary and great person. 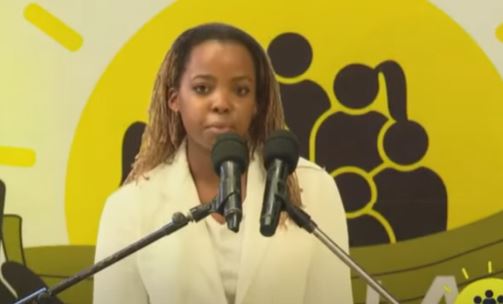 Jimi Wanjigi has been keeping his family private, away from the controversies that surround him as a businessman and politician.

On Monday, Wanjigi gave Kenyans an opportunity to see and hear from his daughter, Wambui Wanjigi.

During the Safina Party National Delegates Convention (NDC) Wanjigi's daughter addressed the congregation, telling them about her father.

"One of the greatest and most important lessons my father taught my brother and me is to always believe in our dreams and pursue them with passion. A lesson which I see him pursuing every day. My father's dedication...not only to our family but to his work is one of the qualities which I admire in him most. He has been my role model, teacher, and best friend," she said.

She went on to drum up support for her father, who is eyeing the presidential seat in the August polls.

She urged Kenyans to support him so they can have a taste of how Mr. Wanjigi is both a visionary and a great person.

"I wish you, well dad, as you take this mantle and this quest to be the 5th President of the Republic of Kenya. It is my hope that when you ascend to office you serve the people in true affirmation of God's will for man and woman. Every person deserves a decent life and the opportunity to live with dignity," Wambui said.

'They have not eaten!' Eric Omondi protests the house arrest of Jimi Wanjigi