'The information is credible,' Embassy letter leaks on terror alert this weekend

The French, Netherlands, and German embassies have issued terror alerts, urging their nationals in Kenya to avoid public places such as restaurants, hotels, and shopping malls.

They have called on vigilance at areas frequented by Western nationals in a letter dated January 27, 2022 titled, 'Concerns French report about possible attack'.

It read: "Date 27.0.022 Dear compatriots, Today, the French embassy in Nairobi has issued a warning to the French community that an attack on Western targets and civilians could take place in Nairobi in the coming days."

Adding, "The embassy has been informed about this by the French colleagues. The information is considered credible.

Of course, we all hope that this threat remains free, but we still want to pass this information on to you so that you can take the necessary precautions yourself. As usual, the information is not specific the time and place of the attack are unknown."

"For the next few days, try to avoid places where many 'westerners usually gather and be vigilant As soon as more information is available, I will of course inform you as soon as possible. Nevertheless, I wish you a good weekend. I hope with you that the weekend will be one without attacks," The Netherlands ambassador, Maarten Brouwer to Kenya signed off.

Check out the communique sent out, below. 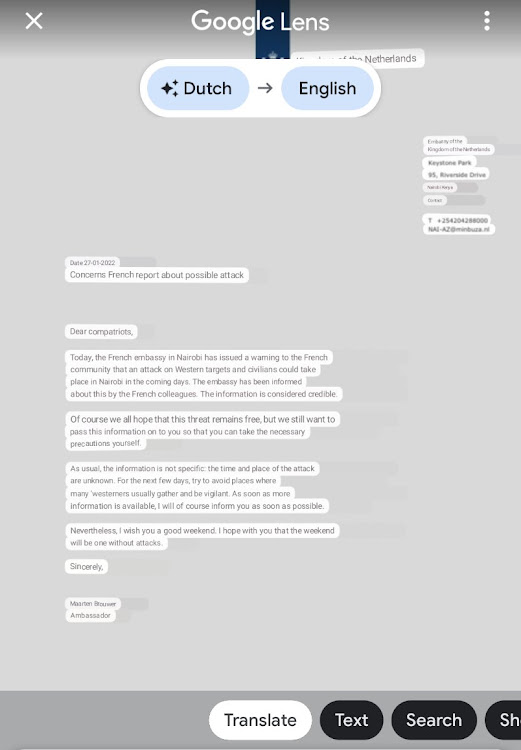 Here are reactions from Kenyans

lynetmusembi: God will take care of us

_.scooby.drew: Fear is what they pushing

nancy.nekesa.7737: In God we trust...they will be destroyed before destroying us

mutuku9446: Our own government is busy campaigning and preparing for the fifth, attack in northeastern and Lamu are back as usual.

bigkevjnr: Other countries Intelligence is very alert compared to our country I think we've entertained lawlessness in Lamu coastal and N Eastern region government need to do more.

dripping_machine: Foreign countries are only concerned about their nationals only lol.

“Most artistes will be asked to compose songs for politicians during this electioneering period. Before you accept, get into contracts...' - KAMP's ...
Politics
3 months ago

Carolyn Auma, the deceased's second-born, said her father, Isaac Juma, was attacked and killed by relatives whom she can identify.
Lifestyle
3 months ago

Billionaire Chris Kirubi left nothing for wife and mistress