'I miss him,' Governor Charity Ngilu feels sad that her husband is not around

• Ngilu is proud of her milestones as a female leader, but sad that her late husband Michael Mwendwa Ngilu is not alive to witness it. 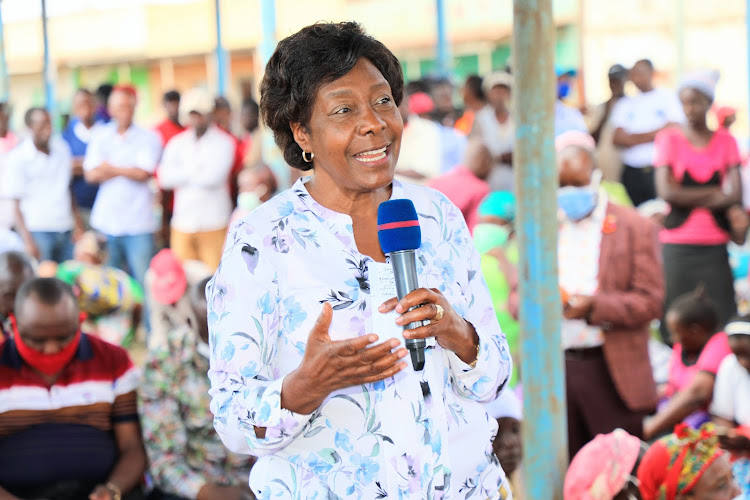 Kitui Governor Charity Ngilu is not only one among the few female governors that Kenya has, but also a tough one.

Ngilu, who was first elected Kitui Central Member of Parliament in 1992 is among the few Kenyan women who have contested for the presidential seat.

The second Governor of Kitui County is proud of her milestones as a Kenyan leader, but sad that her late husband Michael Mwendwa Ngilu is not alive to witness it.

In an interview with Nation, Ngilu says her husband who died in 2006 was her strong pillar, and she wishes he was alive to witness his success.

"My husband supported me, he was there every time. Wherever he was, he told people I was the best MP. I miss him and I feel sad he is not around to be with me as the governor now and see the journey," she shared.

Ngilu said there are many challenges she endures as a female leader, and the support from her husband would have come in handy.

"A woman needs all the support, from the spouse especially. Men are supported so much by their wives and I wish all women also have their husbands to support them," she added.

The first-term governor also shared the difficulties of balancing her life to give time to her electorates, family and also herself as a woman.

Mary Nkatha speaks on her relationship with Mike Sonko (Video)

"Most of those videos from Sonko need to go for a forensic audit. I was held at gunpoint." Mary Nkatha
Politics
1 month ago