(Video) 'Get a life and move on,' Lilian Ng'ang'a to Alfred Mutua 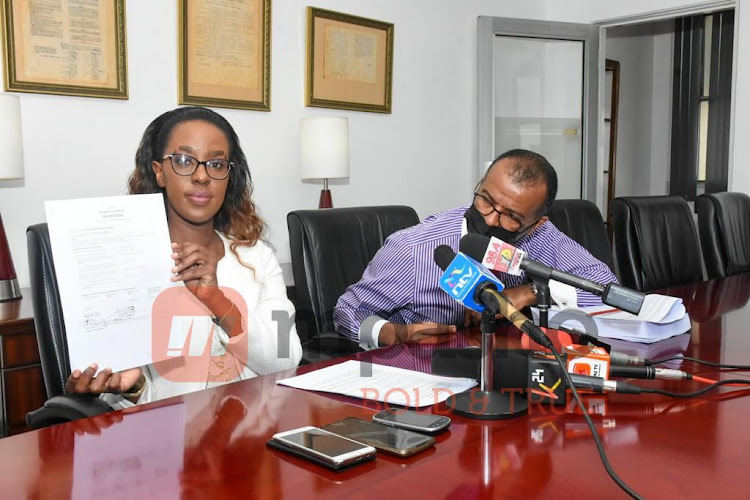 Former Machakos first lady, Lilian Ng'ang'a has claimed in a statement by her lawyer Philip Murgor that she has moved on but the governor Alfred Mutua hasn't.

"I ended my relationship with Alfred Mutua in early June this year," she said, "On repeated occasions and as recently as two weeks ago, I’ve seen Mr. Mutua state in print and social media that we are still friends, and our separation has been amicable."

Lilian noted, "These are Mr. Mutua’s usual theatrics and lies. Mr. Mutua and I have not spoken since late August 2021."

In the statement, Lilian outlines how her property was ceased by the governor.

"On 8th September 2021, Mr. Mutua accompanied by his police bodyguard, Martin Nzinghi arrived at my apartment parking lot at Kileleshwa, Nairobi, and without my knowledge or consent and using a spare key which he had illegally obtained, drove away from my personal motor vehicle KBY 186G - a car which had been fully registered in my name since 2014.

Mr. Mutua proceeded to fraudulently transfer the ownership of the car in the logbook into his name and thereafter sold the vehicle to a 3rd party.

I filed a case that is pending in court so I will not comment further on it, except to ask the purchaser to be on notice that I maintain my claim to ownership.

I, therefore, call for a criminal investigation into this serious criminal offence. Along with the same fraudulent conduct, Mr. Mutua recently and illegally transferred my shares in the Ndash Enterprises LTD (the hotel company)."

She shared the details of the properties as per her lawyer's investigations and in her statement added, "Mr. Mutua is overreacting to our separation. Whilst I indicated that I wanted to move on with my life, he thought otherwise."

Adding, "He also threatened to harm persons close to me. He further demanded I apologize and retract the statements I've made on social media - regarding our breakup, which I declined."

Concluding her statement, "Lilian noted, "I am publicly requesting Mr. Mutua to immediately return my property, cease threatening my life, and those around me and stop his arrogance, wanton abuse of power, manipulation and bullying. He needs to get a life and move on."

In a press conference with her lawyer Philip Murgor, Lilian said she started receiving threats from the governor after his birthday party at Ole ...
Exclusives
3 weeks ago