Sonko's daughter flaunts family parrot: How much it costs to own one 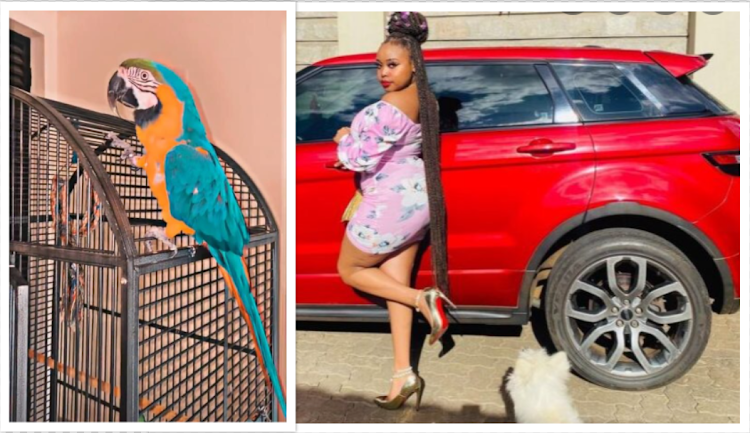 Rich kid Sandra Mbuvi took her followers on a tour of their palatial family estate in Mua Hill, Machakos County.

The videos went viral as Sandra broadcast the lifestyle that they are accustomed to.

Among the videos she shared included the exotic wild animals that her dad - Former Nairobi governor - rares on his huge farm.

Check out all this in the two stories below.

Inside the compound, there is a basketball court, an ostrich pen, exotic birds pen and a mausoleum of Sonko's father Kioko Kivanguli.
Politics
3 months ago

Sandra showed the guest house that is in the backside of the house. And it looks like a whole 5-star hotel.
Politics
3 months ago

Maintaining this lifestyle demands that you have lots and lots of cash.

Now, the Kenya Wildlife Service has put out a gazette notice directed at Kenyans who own the African grey parrot.

Tourism Cabinet Secretary Najib Balala in the gazette notice said the bird owners will have to part with Sh12, 000 as registration fees.

He added that the owners will also have to pay Sh7,000 annually to keep the birds, which are threatened with extinction mainly due to habitat loss and illegal trade.

“Any person, group of persons or institutions in Kenya, who are in possession of African grey parrots without a permit or license issued by the Kenya Wildlife Service, declares them to the service for registration/permitting within a period of 45 days from the 25th October, 2021, shall not be subject to criminal prosecution,” Balala said.

The African grey parrot is one of the oldest bird species kept by humans, with records dating back to biblical times.

The parrot’s ability to talk and mimic sounds makes this medium-sized parrot a captivating companion.

It is not clear if this will affect the Mbuvi's as they own a parrot whose breed is described as the blue-and-yellow macaw.

This is a large South American parrot with mostly blue top parts and light orange underparts, with gradient hues of green on top of its head. It is a member of a large group of neotropical parrots known as macaws.

Its aim is to stop the government from euthanizing the animals, who now number around 100, up significantly from the single male and three females ...
Lifestyle
1 month ago