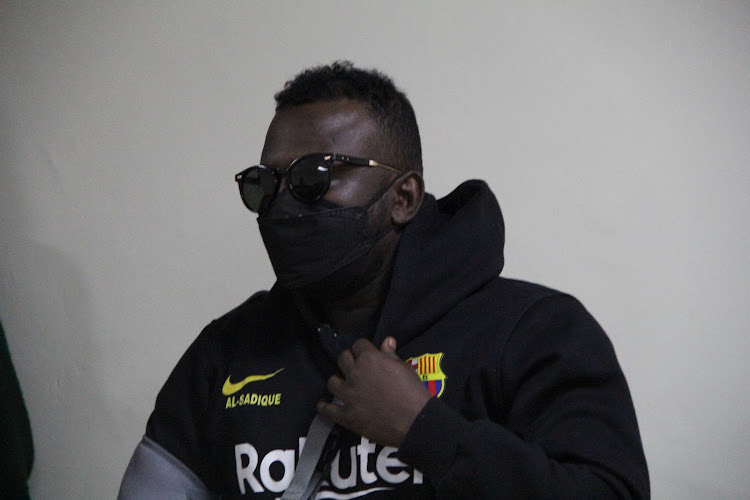 Lamu County Senator Anwar Loitpitip in the dock on Monday ,October 25,2021 during his Charge’s application. He was arraigned for alleged shooting of a 32-year-old woman identified as Joy Makena in Nanyuki town around KANU grounds area at about 2 am on Saturday.
Image: MUTURI MWANGI/KNA

Lamu Senator Anwar Loitiptip seems to have reached out to Joy Makena and her family after he shot at her two times.

The first shot hit her on the right leg and the second shot missed her by a whisker and hit a tree where she was hiding behind.

They were saved when the senator's bodyguard restrained him from shooting further.

The Sunday incident in Laikipia landed the senator in court where he was freed on a Ksh 500,000 cash bail and a Ksh 1m bond.

Read the harrowing narration of Joy Makena and her husband Turo Jaso on the night she was shot in the story below.

I heard her call out, ' Turro, amenishoot mguu.' And she feel down. The second shot missed her narrowly and landed in the tree."
Politics
9 months ago

Now, the Lamu politician has agreed to pay for the medical expenses of Joy Makena after reaching an out of court settlement agreement with the victim.

According to the official settlement documents, Anwar has agreed to cater for Makena’s medical bills, which the victim said she was struggling to clear since she is currently unemployed and her husband works as a security guard.

Loitiptip similarly agreed to cater for his own medical expenses.

“Both parties shall upon execution hereof withdraw the complaints made at Nanyuki Police station over the incidence of 24th October 2021,” the settlement documents, drawn by Chweya and Associates Advocates, read in part.

“Neither party shall have any claim against the other over the events of the 24th October 2021 upon execution hereof.”

The settlement documents similarly stated that the binding agreement had been reached mutually between all parties involved and not through coercion or undue influence.

The altercation started when he asked the senator to stop beating the woman he was with and instead agree on how to resolve their issues. Seconds ...
Politics
9 months ago