MP speaks out after serial killer Masten Wanjala is lynched

Piece by: KNA by Ian Imbaiza 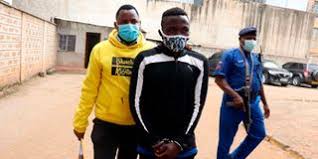 Wanjala had fled to his native home in Muhoya, Kabuchai constituency Bungoma County.

Wanjala was supposed to appear before a Nairobi court this week to answer to murder charges of killing thirteen minors before escaping from Jogoo road police station where he had been detained.

The area chief Boniface Ndiala confirmed the death saying that Wanjala was killed in his home area after being identified by locals as he was playing soccer and was lynched by that mob.

“Masten Wanjala was killed today by the mob after he was identified by the locals as he was playing soccer in his home area. We are still wondering how he managed to escape from legal custody,” He said.

The MP Kabuchai constituency Majimbo Kalasinga addressing the press said that the government should explain to us how Wanjala managed to escape where he was detained.

“We are aware that Wanjala's case was still in progress, his escape made Kenyans' lives to be in danger. I would like the government together with the department that was in charge of his incarceration to explain to us how Wanjala managed to escape from where he was detained,” he demanded.

Wanjala is said to have travelled to his home immediately after the prison break. He later joined a football match the following day assuming all was ...
Crime
1 month ago