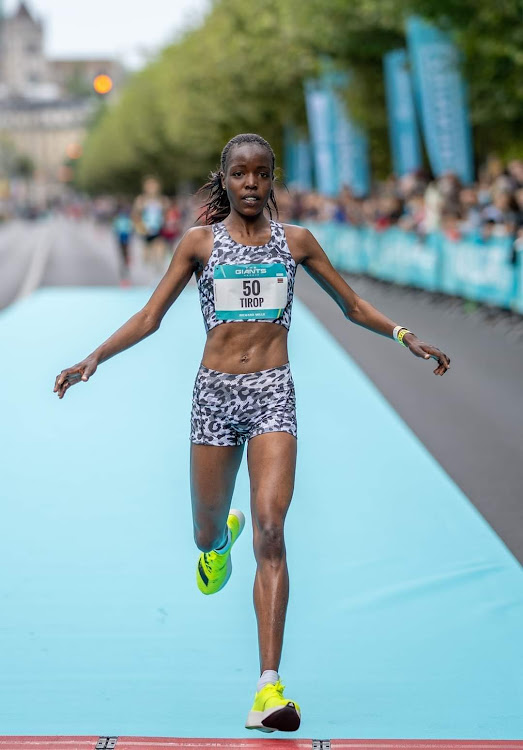 Tears flowed freely and condolences poured in after the country learnt of the death of world 5,000m bronze medalist Agnes Tirop, whose body was found with stab wounds in their Iten home in Elgeyo Marakwet county.

Among those, who paid tribute to the 2015 world cross country champion was President Uhuru Kenyatta , who said he is crestfallen by the demise of such a promising and young athlete.

"It is unsettling, utterly unfortunate and very sad that we've lost a young and promising athlete who, at a young age of 25 years, she had brought our country so much glory through her exploits on the global athletics stage including in this year's 2020 Tokyo Olympics where she was part of the Kenyan team in Japan," President Kenyatta eulogised.

Agnes Tirop, 25, was part of Team Kenya to this year's Tokyo Olympics where she represented the country in the 5,000m race and finished fourth in the final.

The president said Kenya's ambition to maintain its status as a sporting powerhouse has suffered a huge blow considering Tirop was one of the country's athletes flying the national flag on the international stage.

"It is even more painful that Agnes, a Kenyan hero by all measures, painfully lost her young life through a criminal act perpetrated by selfish and cowardly people," he said.

Last month, at the Adizero Road to Records event in Herzogenaurach, Germany, Tirop broke the women-only record in 10km, timing to 30:01 to win the race.

Similarly, Athletics Kenya described Tirop as a fast-rising athlete who was well on her way to ruling the track and road races for a long time.

"Kenya has lost a jewel who was one of the fastest-rising athletics giants on the international stage, thanks to her eye-catching performances on the track. Just last month, she broke the women-only record in the women’s 10km and last week, she finished an impressive second, timing 30:20 at the Valencia Half Marathon," the federation said.

National Olympics Committee Kenya president Paul Tergat was also in shock over the 25-year old's death and called for speedy investigations to accord justice to her family and friends.

"Agnes just represented our country during the recent Tokyo 2020 Olympic Games and has been performing exceptionally well in her athletics career. We expect the authorities to do all that's within the law to unearth the cause of this sudden death as we appeal for enhanced protection of our sportsmen and women," he said.

Nandi governor Stephen Sang expressed dismay at the turn of events and wished strength and comfort to the athletics fraternity as well as family and friends of the deceased.

"It is with utter disbelief and shock that we have lost two-time world championship bronze medalist Agnes Jebet Tirop. My heartfelt message of condolence to her family and the entire athletics fraternity," he said.

Tributes also poured in from beyond Kenyan borders.

Michael Boeting, an agent at one4onesports management agency, said Tirop would be most remembered for her majestic running style and permanent smile.

Athletics Uganda also said: "We're very saddened to hear about the passing on of our sister Agnes Tirop. One of the finest long-distance runners of this generation. Our heartfelt condolences are with Tirop's family, AK and the entire athletics fraternity.

It seems like before his demise, he took time to pen his own tribute in his own words that detailed his life, as well as his last advice and memories ...
Exclusives
9 months ago