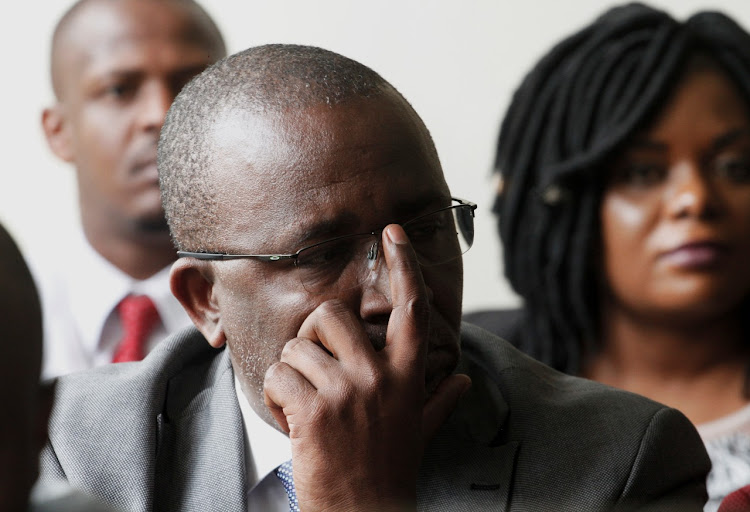 Meru Senator Mithika Linturi is on the spot for entering into a couple’s hotel room when the husband was out and allegedly attempting to rape the wife.

Linturi has moved to court seeking to stop the police from arresting or charging him with the offences of attempted rape and indecent act with an adult which are related to the incident.

According to police documents, the woman reported that she was with a husband and friends at Maiyan Villas Resort Nanyuki on January 29 2021.

She said later that night she retired back to their room but she did not lock the door because her husband was still out.

At about 3 am she heard the door unlocked and since the lights were switched off she assumed it was her husband and the person entered her bed and started touching her in a very unusual manner.

However, according to the woman, the man she thought was her husband never uttered a single word while he inappropriately touched her and later they both fell asleep.

“Thirty minutes later she heard a knock on the door and went to open the door only to find her husband standing at the door prompting her to switch on the lights since she was confused who was in her bed whom she thought was her husband,” the statement reads in part.

On switching on the lights, they both realized that there was a stranger in their bed and the husband became furious raising an alarm.

Their friends who were with them in the hotel came to investigate and one of them identified the stranger as Linturi.

It was established that the senator was also a guest in the resort and had a room adjacent to the couple’s room and it’s not clear if the legislator confused his villa with that of the couple.

The woman alleged that Linturi offered to settle the matter amicable with them offering them Sh 200,000 in cash and an Sh 800,000 cheque but later reported them for extorting him.

The couple decided to file their complaint of attempted rape and indecent act with an adult against him which he may be charged with if the DPP approves the charge sheet.

In his application through Lawyer Charles Mwongela, Linturi wants the court to bar the state from charging and arresting him for the attempted rape and indecent act with an adult.

Linturi says Interior CS Fred Matiangi while answering a summons from the senate Committee National Security said they intended to charge him with attempted rape as an added charge to the forgery charge he is facing.

The legislator argues that the alleged attempted rape charge was never disclosed to him or the court in May this year when he filed and got orders to stop the forgery charges.

He says he was unaware of the additional criminal offence of attempted rape and indecent act with an adult which are now being sprung on him as a further surprise.

Ex-Nairobi governor Mike Sonko has appealed to his fellow bloggers to give the Machakos governor a chance to mend his marriage to Lillian Nganga. In ...
Politics
11 months ago