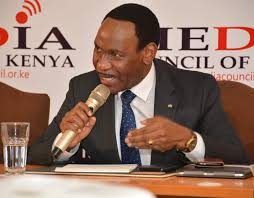 It is official,  who was the CEO of Kenya Film Classification Board has been sent on terminal leave.

He is currently under investigation by EACC for irregular payments.

A letter by June Gachui, the board session chairperson dated August 6, Mutua had been sent on terminal leave.

Adding, "Ezekiel Mutua, who is serving his second and final term is proceeding on terminal leave from  August 6, 2021, pending the expiry of his contract on October, 2021.

Gospel singer Size 8 is over the moon after she heard her song Mateke being played at the Tokyo Olympics.
Entertainment
1 year ago