CCTV details of intruder who broke into Laikipia County Assembly

Piece by: KNA by Martin Munyi

• “In the CCTV footage the man is seen going through some files then suddenly plucks some papers which he tears down,” said one of the police investigators who declined to be named since he is not authorised to speak to the media. 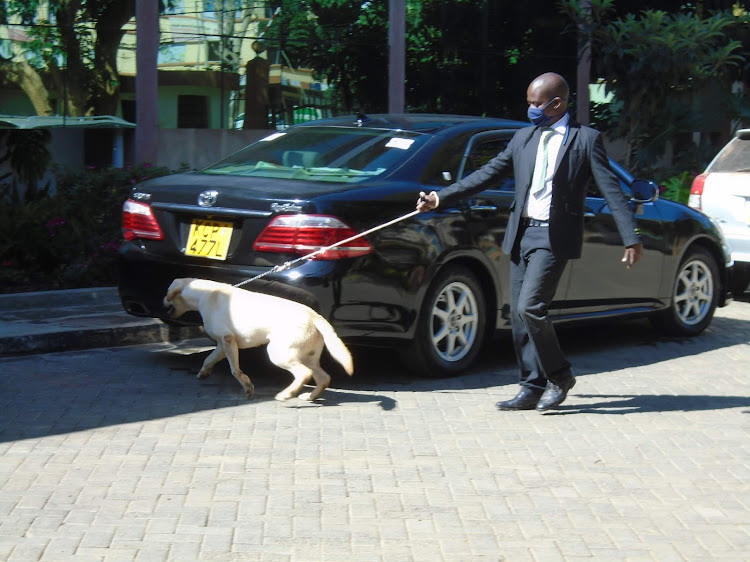 A policeman with a sniffer dog at the Laikipia County Assembly precincts in Nanyuki town following a break-in on Thursday night.

Authorities in Nanyuki town are probing an incident in which an unidentified man gained entry into the Laikipia County Assembly precincts, Thursday night, accessed several offices, and later left without stealing anything.

Police, using sniffer dogs, on Friday spent the better part of the day inspecting the premises and reviewing CCTV footage that showed the man accessing several offices and perusing some files.

“In the CCTV footage the man is seen going through some files then suddenly plucks some papers which he tears down,” said one of the police investigators who declined to be named since he is not authorised to speak to the media.

Members of the County Assembly and other staffers were kept on high alert as the investigators combed the entire building using sniffer dogs while others were dusting for fingerprints.

House Speaker, Patrick Waigwa, told the media that the security experts, after finalizing their probe, assured them that there were no security threats.

“Whenever an unknown person intrudes at your place at night, it raises eyebrows on his or her intention. The security experts inspected the entire building and they have assured us that there is no security threat since they did not find any harmful devices,” Mr Waigwa said.

He said the local security team was reinforced by their counterparts from Nyeri to unearth the motive of the intruder.

The trespasser is said to have accessed the facility by jumping over the fence before sneaking into the building where he smashed a computer keyboard and tore some documents.

He is said to have switched on lights in some of the offices and merrily glared at the security cameras.

“The intruder did not steal anything but smashed one of the computer keyboards and destroyed some documents. The motive is still not clear but the security personnel will dig into the matter and brief us accordingly,” Speaker Waigwa said.

Mr Waigwa said he has, however, directed all staff to be vigilant and avail any information to the relevant authorities regarding the incident.

“Despite getting assurance from the police that the premise is safe and resumption of operations, I am urging all members of staff to be alert because the motive of the intruder is yet to be known,” Mr Waigwa said.

“We prohibited our members of staff and MCAs from accessing the facility to allow the security agents to conduct thorough investigations,” he added.

The premise is always manned by some police officers.

He surrendered on Sunday night after being on the run for two days. Police said he was escorted to the Kasarani police station by his colleagues who ...
Lifestyle
2 weeks ago