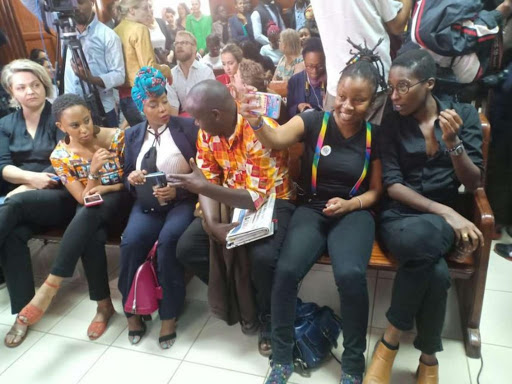 On Friday, members and supporters of the gay community flocked to Milimani law courts hoping for the judge to make a positive ruling on gay relationships.

But it was postponed to May 24 over "challenges". Justice Chacha Mwita, who addressed the court, said the judges have had challenges in writing the ruling. He said:

You may not like the news I have today. We are still working. One of our colleagues is still on leave. We ask you to give us up to May.

The adjournment ignited mixed reactions among Kenyans and below are some of the comments:

NGLHRC: The ruling of #repeal162 has been postponed 😭😭😭. The bench has not finalised making their decision. To say we are disappointed would be an understatement

Brenda Wambui: These are the ways in which homophobia moves. Queer people have been waiting for this ruling for 3 years. The judges, knowing they would delay the judgment, don’t even have the courtesy or basic decency to say this in advance. Because queer lives are a joke? #Repeal162

Allen Arnold: The only problem I have with decriminalization of same sex marriage in Kenya is that these gays will have the courage to approach any man they meet. Personally, approaching me will result to a fight.

Michael Mburu: This is a very good day for Kenya. I congratulate the judges for not allowing this subversion of the constitution. If they want to force gaysim & lesbianism on us let them go the people with a referendum. Proud of the judges.

Muthuri wa Kiama: The courts should set a precedent for Africa. We have our own society and culture and don't have to copy wazungu on every matter.

Major Tialala: Hii ni takataka. Gay marriage is unconstitutional and would require a referendum. Good luck with that. I am beginning to suspect that the Star has homos as editors.

There is no such thing as "gay séx" in any Kenyan law. It is neither illegal nor legal. The law simply doesn't care. The only thing that is illegal in Kenya is Búggery. This filthy act is basically kutomba matako ya mtu. This law doesn't care whether the sodómite and the sodómised is a man or a woman. Therefore the law is a general application law and does not discriminate against anyone.

These filthy animals need to be put down by Kenyans of goodwill. Nchi gani hii tunalinda kama wasenge wanatembea dunia proclaiming loudly how they másturbate with other men's intestines and they are proud of it?

Patriotic Kenyan: Heheheheehehe smart move... reminds me of Maraga and the lack of quorum in the presidential elections court fiasco. So that photo is the gang of gays representatives?😂😂😂😂😂😂😂😂😂

It will never be allowed in Kenya, we are a conservative nation held by strong values at the grassroots not what you see in Nairobi