Of course, nobody expected the Duke and Duchess of Sussex to renovate their new home on a shoestring. But few were prepared for the eye-watering financial outlay revealed in royal accounts this week.

When it emerged that Prince Harry and Meghan have so far spent a whopping £2.4 million of public funds on their home improvements, reaction ranged from confusion to anger.

Take lessons! What Kenyan celebrity mothers should learn from Meghan

Why should the British public be expected to foot such an astronomical bill for the refurbishment of Frogmore Cottage — the multi-millionaire couple’s flash new pad in the grounds of Windsor Castle — when there is a spacious flat in Kensington Palace they could have moved into for a fraction of the cost? And how the heck does one spend several million pounds doing up a cottage?

The total bill to taxpayers once Frogmore — where the couple moved to this April and are now bringing up baby Archie — is finished is expected to reach up to £3.2 million.

This money comes from the Sovereign Grant, valued at £82.2 million this year and comprised of profits from the Queen’s property portfolio (the Crown Estate), which are paid to the Government.

Twenty-five per cent of these profits are paid to the monarchy to fund the upkeep of its property, travel, security and staff. While the Sovereign Grant isn’t taxpayer money, it is considered to be public funds, belonging to the state.

In fairness, Harry and Meghan have spent £250,000 of their own money on the fixtures and fittings at Grade II-listed Frogmore.

So what has the cash been splashed on? We investigate this very costly home refurbishment.

Frogmore was formerly made up of five ‘dormitory-style units’, used as staff accommodation. Converting the small(ish) houses into one large, reportedly five-bedroom, property was a huge job, requiring the replacement of staircases and all the old floor and ceiling joists, removing many existing partitions and creating new doors.

A source says the old original chimney stacks have been repointed with chimney liners reportedly inserted in order to accommodate fashionable log burners, while plans approved last July by Windsor and Maidenhead Borough Council detail designs for two orangeries for the couple to enjoy in the summer months.

‘Natural light is important for the Sussexes as Meghan misses the LA sunshine,’ says a royal source.

The construction work alone on such a project could cost up to £1.25 million, says architectural technologist Nicholas Stockley of Resi Architects, who has worked on large country residences and multi-million-pound homes.

‘A normal homeowner would typically go to tender to multiple contractors. If someone asked me how much it would cost to turn five houses of this scale into one, I would say the minimum would be £750,000,’ says Mr Stockley.

‘But I imagine this couple have their own professionals, which could inflate the price.’ 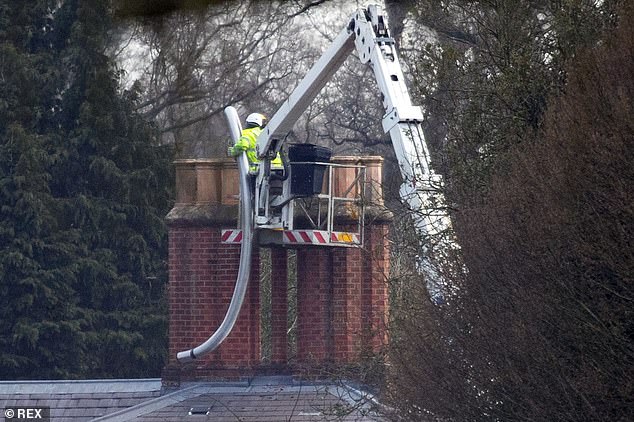 with added extras that upped the cost

It is not known if the orangeries have yet been installed, or who will pay for them, but Mr Stockley says he would anticipate each to cost from £50,000 to £70,000 if the couple wanted high-spec glazing.

Elsewhere, he adds, standard new windows that comply with listed building regulations could cost up to £5,000 each, while an elaborate ‘feature’ window, if required, could be up to £10,000.

Then there have been additional costs such as the ‘floating floor’ required by planners. A source close to the Sussexes said the cottage had an old kitchen floor that builders were not allowed to remove. To solve this, they had to create a suspended one, where timbers are laid over the old floor.

It sounds simple, but would have resulted in major and expensive changes, says Mr Stockley, who adds that the floating floor could be turned into a feature: ‘Part of the ceiling could be removed to create a double-storey height room with steps leading up to a raised kitchen floor. This would be costly, but have the wow factor.’

New water mains are said to have been installed, presumably to replace outdated small pipes going into the building from the main supply with larger ones suitable for high-pressure showers. Mr Stockley estimates the cost of replumbing the property may run to £750,000.

The Mail has been told that the environmentally aware couple have also paid personally to install a £50,000 ‘eco-boiler’ housed in its own building on the premises, which supplies endless hot water and low-carbon heat.

The 17th-century property will have been rewired, in part to comply with building regulations, but also to allow for the use of the ‘smart’ technology Harry reportedly wanted. This would enable the couple to control lighting, heating and security through an app on their smartphones. They could even open curtains, windows and activate CCTV. Liam Parker, of home automation company Quest End, says the cost of rewiring and fitting a large property with smart tech could start at £200,000.

Another source has told the Mail that a sound system has also been installed throughout the cottage (Meghan has spoken of the ‘positive vibes’ she gets from music).

No more cheating here!’ DJ Mo and Size 8 promise to be faithful to each other

This is the private jet video that cost Janet Otieno millions

‘I got addicted to pain killers despite my doctors warning,’ says...

Jalango reveals why dating a Luo guy should be in every...

All about Imperforate Hymen: Condition that made Ruth Matete fear she...

‘I was dumped after 2 weeks’ Terence Creative speaks about his...