He thanked his wife and children for the support and understanding that they have accorded him since he started playing.

• Injera says it is now time to spend time with his family.

He is bowing out as the world’s second-top try scorer in 7s with 279.• 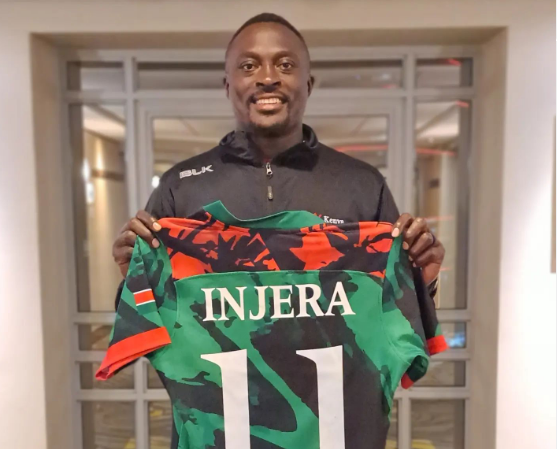 Collins Injera has retired from rugby.

"Everything must come to an end, sometime. I have always said that I will know it’s time because my body will tell me," he said.

And for the past few months, it has really ‘spoken’ to me so, finally, I have decided to listen to it. I hope I made you all proud."

He is bowing out as the world’s second-top try scorer in 7s with 279.

Injera said that as hard as this is for him, after 17 years of literal blood, sweat and tears he has to retire.

"It's time to sleep away from this great game that has given me so much more than I could ever ask for.

Thank you, Lord, for giving me the strength, opportunities and protection to be able to play the game I love for this long." he said.

He thanked his wife and children for the support and understanding that they have accorded him since he started playing.

"Thank you very much for all the love and support and understanding.

Those days, weeks and sometimes months that you endured without my presence as I was busy chasing my dream across the globe are finally over.

"It's now time to spend quality time with you."  he said.

Speaking during the Sports Personality of the Year Awards at the Kenyatta International Convention Center, the 36-year-old believes athletes who have placed the country on a global map deserve better than just awards.

"We should not wait until such awards as Soya to recognize great sportsmen and women. There are better and many ways to crown our heroes," Injera said.

"Our streets and facilities can also be named after great players. Things like this will go down in history and will also motivate junior athletes to chart their path to stardom."

Former Education CS George Magoha has been thrown into mourning following the death of his brother Alex Nyabera Magoha.
Entertainment
1 week ago

The cause of death of  teacher Joseph Gathogo, whose body was found decomposing in a homemade coffin has been confirmed to be suffocation.
Crime
1 week ago