An employee named Briana Tyler — who survived the attack — earlier described scenes of terror as the store manager entered a staff break room, and opened fire.

• City authorities identified the shooter as Chesapeake resident Andre Bing, saying he was armed with one handgun and multiple magazines. 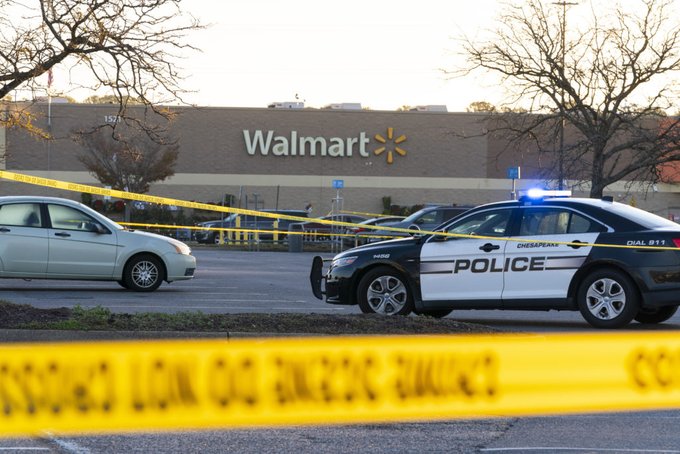 Six people were left dead after a 31-year-old overnight manager at Walmart opened fire before turning the pistol on himself.

At the time the store was full of people busy with Thanksgiving shopping.

An employee named Briana Tyler — who survived the attack — earlier described scenes of terror as the store manager entered a staff break room, and opened fire.

“He wasn’t aiming at anybody specifically,” Tyler told ABC’s “Good Morning America” program. “He just literally started shooting throughout the entire break room and I watched multiple people just drop down to the floor, whether they were trying to duck for cover or they were hit.”

She said the gunman looked right at her and fired but missed by mere inches. “He didn’t say a word, he didn’t say anything at all,” Tyler said.

Tyler, the store employee, told ABC that the manager in question had a reputation as a difficult character.

“He was the manager to look out for because there was always something going on with him, just having an issue with someone. I would’ve never thought he would do something like this.” She said

The motive behind the shooting is unknown.

City authorities identified the shooter as Chesapeake resident Andre Bing, saying he was armed with one handgun and multiple magazines.

Walmart confirmed in a statement that Bing was an overnight team lead, employed with the company since 2010.

In the Walmart attack, emergency calls were first made just after 10:00 pm Tuesday (0300 GMT Wednesday) while the store was still open. Chesapeake is about 150 miles (240 kilometers) southeast of the US capital Washington.

The shooter and two victims were found dead in the break room, while another body was found next to the front of the store, the city said. Three people taken to hospital with gunshot wounds later died.

The youngest of the victims was 16 years old, officials said.

An advocacy group called Guns Down America has reported that from January 1, 2020 to May 14 of this year there were 448 “gun incidents” and 137 deaths at 12 large national retailers.

So far in 2022, the Gun Violence Archive website has tracked more than 600 mass shootings in the United States — defined as an incident with four or more people shot or killed, not including the shooter.

This is America’s second high-profile mass shooting in four days.

Officer arrested after shooting man at close range in Umoja

A police officer was Sunday, November 13, arrested after he shot and killed an unidentified man after an argument in Umoja area, Nairobi.
Crime
3 weeks ago
WATCH: For the latest videos on entertainment stories