He was the Commandant Kenya Air Force (KAF) Training Wing

• Police and military officials were called to the scene and rushed him to a local hospital where he was pronounced dead.
• They later picked up the body to the mortuary as investigations go on. 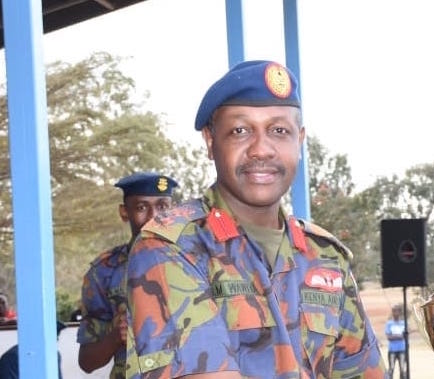 The late Colonel Mwangi Waweru. The senior officer was found dead in his car
Image: The-Star

Police and military officials said the Col was the Commandant of Kenya Air Force (KAF) Training Wing was found unresponsive in his car Monday evening along Juja Road next to the base gate.

Witnesses said they had seen the car at the scene for a long time,  prompting them to call police and military officials. It is not clear what caused the death.

The officer had left the camp at about 4 pm and got into his Toyota Vitz car and was headed for the city centre when he died, officials said.

Police and military officials were called to the scene and rushed him to a local hospital where he was pronounced dead. They later picked up the body to the mortuary as investigations go on.

Col Waweru had between September 22 and 23 presided over the closing ceremony of the Kenya Air Force New Soldiers Sports Talent Search Championship 2022 at the Sina Makosa Stadium, Moi Air Base in Nairobi.

The Service Members were grouped into their respective Formations/Units and competed against each other.

He encouraged the troops to continue working towards continually improving their fitness levels and talents.

His colleagues described him as a hard-working officer. A joint probe of police and military into the cause of his death has been opened.

Meanwhile, police are investigating an incident in which a man was lynched by a mob after he had threatened to burn his house in a domestic brawl with his wife in Riruta, Nairobi.

The body of the victim was found on the roadside on Kinyanjui Road after he had been beaten up by a mob in the area.

This was after his wife had screamed for help from locals after a quarrel with the man.

Police say they discourage mob lynching and want to investigate the incident and take action on those behind it.

Police in Machakos are investigating an incident where a lawyer died after a speed bike he was riding was hit by a lorry along Machakos - Kangundo ...
News
4 months ago

An International Criminal Court suspect, lawyer Paul Gicheru, has passed away. On Monday evening, Gicheru's body was discovered in his Karen home.
Crime
4 months ago

People who died having knowledge of ICC cases