POTUS said trickle-down economics was not working and has never worked for any country's economy.

• Ruto said Kenya will continue expanding its strategic partnership with the US to advance peace .

• The two champion an almost similar economic revival model of bottom up. 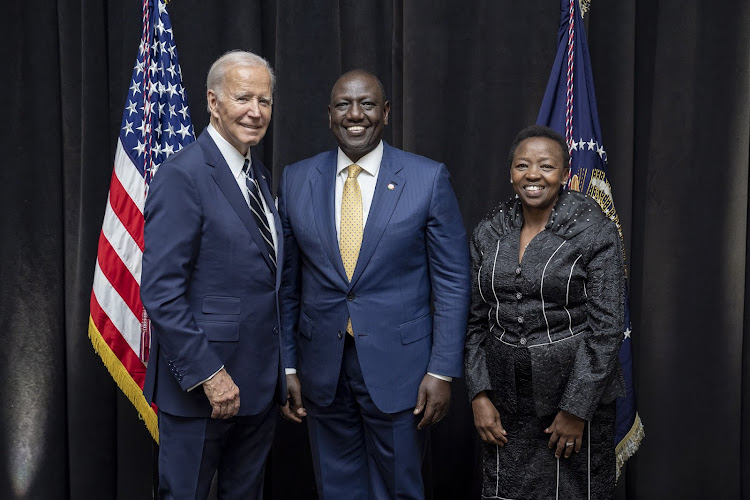 President William Ruto met US president Joe Biden as he winds up his New York trip that saw him take part in the 77th United Nations General Assembly.

As he wraps up his journey to New York and the 77th UN General Assembly, US President Joe Biden met with President William Ruto.

The two leaders met Thursday.  Kenya will keep deepening its strategic alliance with the US, according to Ruto.

"Kenya will continue expanding its strategic partnership with the United States of America to advance peace and prosperity in Africa," he said.

The two promote a bottom-up approach to economic regeneration.

The POTUS stated earlier in the week that trickle-down economics were ineffective and had never been successful for any nation's economy.

According to Biden, his government will keep constructing the nation's economy from the center out and from the bottom up.

The trickle-down theory states that tax breaks and benefits for corporations and the wealthy will trickle down to everyone else to spur economic development.

The bottom-up model was adopted by President William Ruto who anchored his campaigns on it.

According to him, the bottom-up economic model is a strategy for encouraging the savings and financial empowerment of regular Kenyans so that the nation may raise taxes to support the economy.

The day before, US Secretary of State Antony Bliken committed to collaborating with the Ruto government to solve the nation's food insecurity.

The 77th UNGA coincides with the worst drought in the Horn of Africa with many countries in the region including Kenya experiencing unprecedented effects in the last forty years.

Government statistics and data from UN agencies show that 3.5 million Kenyans are in dire need of food.

Ruto's most ardent US supporter finally meets him

Staunch William Ruto pointman in America, Cosmas Ombori Monari aka Cosmo Choy, was finally able to congratulate his leader after he met him during
Politics
2 months ago