Lesuuda says even when she was single people were concerned about her marital status when vying for a political seat.

• The couple has one child.

Nasula Lesuda. She says her marital status has always impacted her career.

Samburu West MP Naisula Lesuuda has revealed how her marital status has impacted her political career.

Speaking with KTN on Tuesday, Lesuuda said her marital status was an issue when she was seeking the elective seat both in the 2017 and 2022 General Elections.

She said competitors would attack her based on her marital status, but her track record made her stand out among male opponents.

"In this election, my opponents said that now I am married, why don't I go and vie in Baringo where I am married?

So the other time I said I was single it was a problem and now that I am married it was a problem. With women, it’s never enough. But in this election, I made sure I worked to a point where this would be a non-issue," she said.

Samburu West MP Naisula Lesuuda  tied the knot with the love of her life, Robert Kiplagat in 2018.

The green and gold themed wedding was held in Samburu and attended by close friends, family and politicians. 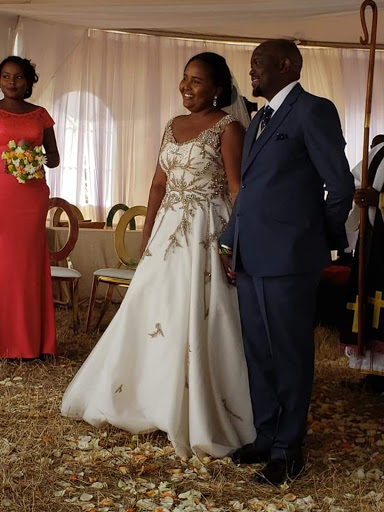 Naisula Lesuuda. during her wedding day to her husband Robert Kiplagat.

The two got engaged at an exclusive invites only event held at Mountain View estate.The traditional wedding was held at Lesuuda’s home in Samburu.

On new year’s eve (2018), the MP announced that she was officially taken.

"Here’s to new beginnings. When we made a decision to not only run for member of the national assembly for Samburu West but also on a Kanu ticket, we knew that it was not going to be an easy task.

However, with your support and prayers, we made it against many odds.

A lot was said about our candidature and even our chances to clinch the seat. you the people of Samburu west believed and together, we made it happen. Thank you.

All said and done, I thank god for the growth that I have experienced both politically and in my personal life. yesterday, marked an important day in my life… I said yes. Blessings in double portions. Here’s to love and light in 2018." She wrote

Lesuuda welcomed her first child in 2020.

KOT are saying Lilian Nganga fumbled the bag by leaving rich Alfred for struggling Juliani. They said on Twitter that Lilian got it wrong among other ...
Entertainment
1 week ago
WATCH: For the latest videos on entertainment stories