3 dead, 1 seriously injured after ramming into a lorry in Kajiado

Two of the occupants in the vehicle died on the spot while another succumbed to injuries while being rushed to hospital.

• The Station Wagon rammed into a lorry heading in the same direction after speeding past a police road block. 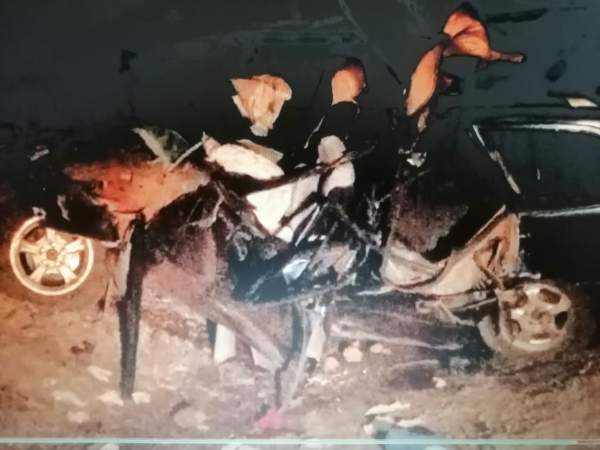 3 people die in Kajiado after ramming into a lorry.
Image: Christine Musa.

Oloililai Subcounty police commander Joseph Mutiria has confirmed the death of 3 people following an accident that occurred at Ilbisil, Kajiado along the Nairobi-Namanga road.

According to the police boss the accident was caused by an overspeeding station wagon vehicle.

The vehicle which had four occupants was heading towards Namanga from Kajiado.

It approached a police roadblock at high speed, bypassing five other vehicles awaiting to be inspected before it rammed into a lorry heading in the same direction.

Two of the occupants in the vehicle died on the spot while another succumbed to injuries while being rushed to hospital.

The fourth occupant sustained serious injuries and is currently recuperating at the Kajiado referral hospital.

"The speed at which that vehicle was moving left other motorists and police manning the roadblock shocked.

They escaped death by a whisker. The other motorist were also left shocked. Sadly a few meters after dangerously crossing the roadblock, the vehicle rammed into a moving lorry which led to the death of three of the vehicle occupants," police commander Joseph Mutiria.

Emmy Kosgei thanked God for saving the minister and his team from the jaws of death.
Entertainment
4 weeks ago

He also claims to have sought restitution for the drama and damages, including settling for Ksh.106,000 in damages and apologizing to hospital ...
Entertainment
1 month ago
WATCH: For the latest videos on entertainment stories