Perhaps it’s still too early to call but I must register my disappointment at the fact that the “Kilimani mums” are too scared to walk the talk! All week long I saw alot of hooting and hollering on Facebook and twitter and I honestly bought into the hype. Sadly, that’s all it was.

The ladies at the demonstration have all shown up in jeans and I am wondering what the whole point of the demonstration is. The Embassava touts were not striping women clad in jeans, they were attacking a lass clad in a form fitting skirt.

Only Esther Passaris and two other lasses seem to have gotten with the program. the rest are just a complete waste! no wonder some men like Robert Alai refused to take the women and their protest seriously. Total lack of commitment to a cause even when it is so close to your hearts makes your cause a joke!

Ugandan women stuck to their guns when they protested. What is this rubbish? This is was the chance the ladies had been writing for to stick it to the illiterate idiotic imps violating our women. 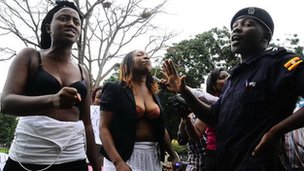 While the Kenyan protesters attending a mini skirt protest have turned up thus:

Cowards1 Cowards everywhere! It actually looks like the protesters are at Uhuru Park because they want to be cool and hip, not to demand respect!

And remember, everyone has a right to an opinion, MINE!

Dramatic twist in case of stolen as one-month-old infant

‘Go down on your knees,’ Isabella Kituri advices widowed women

‘My married bae of 11 years has refused to leave his...

‘Gospel artistes asked for Ksh 300K for a collabo,’ – Mejja

‘I used to look for jobs in obituaries,’ Mwalimu King’ang’i narrates