The girl said she did not want to disappoint her mum.

• The student apologized to her mum and confessed her undying love to her and her brother.

• She also wished her brother the best as he prepared to sit for his KCPE exams. 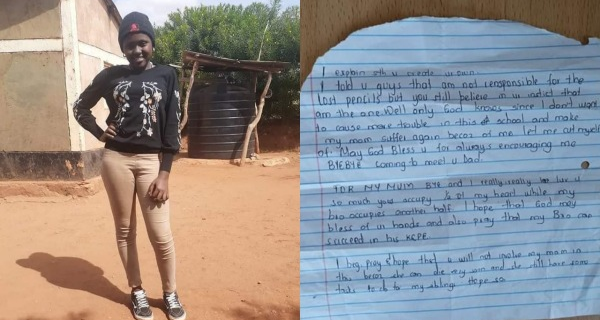 From 3 student who committed suicide after allegedly being accused of stealing ksh 2500 from another student.
Image: Ndungu Nyoro

An alleged suicide note by a form three student who took her own life after being accused of stealing Ksh 2500 has emerged.

The note is addressed to people who accused her of stealing saying no one belived her even when she insisted she was innocent.

She also thanked her mum for her support saying ending her life was one way of ensuring she does not disappoint her mum again.

"I told you guys that I am not responsible for the lost pencils but you still believe in your instinct that is the one.

Well only God knows because I do not want to cause more trouble in this school let me cut myself off."

She said she was happy she would meet her dad who had passed away earlier. 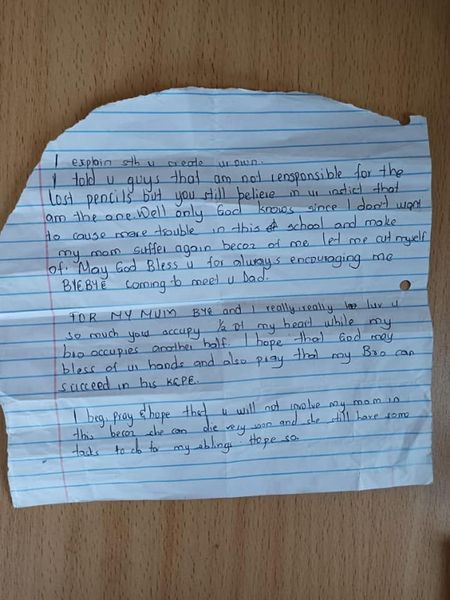 Suicide note allegedly left behind by a form 3 student. She had been accused of stealing ksh 2500 belonging to another student.
Image: Ndungu Nyoro

Suicide note allegedly left behind by a form 3 student. She had been accused of stealing ksh 2500 belonging to another student.
Image: Ndungu Nyoro

Earlier reports has indicated that the girl had been adversely mentioned as a suspect by the majority of her colleagues when the matter was investigated.

It was also alleged that before her death, the girl had admitted to stealing the cash.

Matungulu deputy sub-county police commander Evans Mose said the body was found dangling from rafts of a toilet at a local school.

The matter was reported to the Tala police station at around 3.40 pm on Wednesday.

He said the girl had been accused of stealing Sh2,500 pocket money from her fellow student.

"The deceased admitted that she stole the said money and had kept it in the dormitory." Mose told the Star by phone on Thursday.

He said the student was told by the teacher to retrieve the money from where she had hidden it during break time and give it to the school's administration.

It is at that time that the deceased is said to have hatched the scheme to end her life.

"The girl was given keys to the dormitory but she failed to return. This prompted the deputy principal to go looking for her. Unfortunately, they found the girl's body dangling from the roof of a toilet inside the dormitory building," Mose said.

The student was told by the teacher to retrieve the money from where she had hidden it during break time and give it to the school's administration.
Entertainment
3 months ago

DJ Bash narrates his battle with depression and being suicidal (Details)

Kenyan Disc Jockey DJ Bash has shared little-known details about his struggle with depression and contemplating suicide at some point.
Entertainment
3 months ago
WATCH: For the latest videos on entertainment stories