Why Nithi bridge is described as a killer bridge

• As much as it has breathtaking scenery, the Nithi Bridge has a dark side to it.

• Motorists are advised to strictly follow the road signs and stick to the advised speed limits. 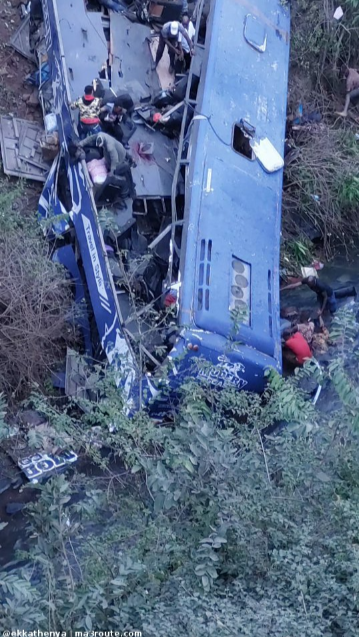 Nithi River Bridge is a sight to behold. The place is so cool and has a natural amazing view.

From its height high up, down the river cuts the bridge across making it possible to view the water body from either side.

As much as it has breathtaking scenery, the Nithi Bridge has been described as a killer bridge.

Its dark side is because of the numerous accidents that normally happen as vehicles driving down the steep meandering valley towards the bridge lose control and veer off the bends flying several meters down into the bridge.

Very few, if any, survive the horror. Governor Muthomi Njuki says he has a blueprint to improve the road but it can only be implemented in collaboration with the National Government since the road is under the Kenya National Highways Authority.

The most recent accident happened on Sunday 24th July 2022 after a Modern Coast bus rammed on the guard rails plunging into the river.

The bus had a total of 45 passengers on board. At the time of this writing, the accident has claimed a total of 35 people while others are receiving treatment, some in critical condition.

County police commander, Ms. Donatha Chali, said the bodies of the dead had been moved to mortuaries in Chuka County Referral and Chogoria PCEA hospitals.

Witnesses say the driver appeared to lose control as the bus hurtled down the steep slope at top speed before plunging 40 meters into the river.

The bus registration number was KCF 614U. NTSA has already suspended operations of the bus company countrywide.

An accident occurred when a truck collided with a matatu on Monday at around 8 pm. Five people died while four others were injured in a road crash at the same spot.

The truck was ferrying milk from Meru town when it collided head-on with the PSV that was going in the opposite direction killing five people on the spot.

Witnesses said the driver of the truck lost control as he was negotiating a sharp corner at the bridge, ramming the matatu before plunging into the river.

Villagers who were at the scene of the crash carried away packets of milk that were scattered on the road and in the river.

Four people died and 11 others sustained injuries after the 14-seater matatu and lorry collided at Kiriani near the notorious Nithi bridge on Friday evening.

It is said that the Nissan driver had tried to avoid the lorry that seemed to have some mechanical problems but unfortunately it followed them hitting the matatu from behind.

A similar tragedy befell Tharaka Nithi after 45 people were killed and at least 27 more injured after a passenger bus crashed into the river.

The same year, passengers on board an Akamba bus cheated death after a landslide created a huge gully along the bridge.

Motorists are advised to strictly follow the road signs and stick to the advised speed limits to avoid veering off the sloppy sharp bends that lead to the bridge.

For heavy trucks, low gears are advised as the slopes are several kilometers long and can strain the breaking system leading to failure and subsequent accidents.

At least 33 people were reported dead after a Mombasa-bound bus they were travelling in plunged into River Nithi along the Meru-Nairobi highway on ...
Lifestyle
2 weeks ago

Several people are feared dead after a bus plunged into River Nithi in Tharaka Nithi county on Sunday.The bus belonging to the Modern Coast
Lifestyle
2 weeks ago

At least 33 people have died after a bus plunged into River Nithi in Tharaka Nithi county on Sunday. The driver of the Modern Coast bus lost control
Lifestyle
2 weeks ago
WATCH: For the latest videos on entertainment stories