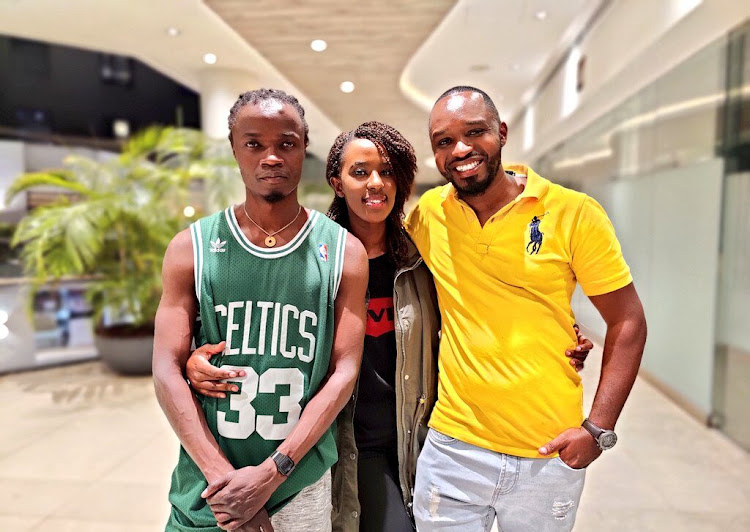 Roast House, the first comedy TV show of its kind in Kenya, is now streaming on Showmax.

With each episode, the 10-part series features a team of comedians armed with brutal and hilarious roasts aimed at a celebrity in the hot seat.

The first episode of Roast House kicks off with the roast of Boniface Mwangi, who’s accompanied by his wife Njeri Mwangi and his musician and activist friend Juliani.

Arguably Kenya’s most prominent activist of our time, the self-proclaimed ‘People’s Watchman’ (popularly known as Bonnie) has had his fair share of trouble with the police and with politicians.

Some might even argue that he’s seen the inside of a cell more times than any Kenyan in the last few years.

In the course of the 24 minutes of Roast House episode 1, Boniface’s activism woes earn him a fair share of roasts from the comedians taking the stage, with Justine Wanda delivering one of the most brutal roasts of the night:

In this roast of Boniface Mwangi, nothing is off limits, from his ‘failed’ political career to his relationship with Juliani and former Machakos First Lady Lilian Ng’ang’a to his recent ‘beef’ with the Governor of Machakos County, Dr. Alfred Mutua.“

Lilian gave up the prestige, the tenders, the titles, Konza technology city, the F1 track, just to be with her love Juliani, and their lovely third wheel Bonnie,” comedian John Ribia dishes.

Even his wife Njeri catches a few stray bullets.

“We were told categorically not to speak about Bonnie’s wife Njeri, and now that I see her hairstyle, I can understand why,” Bashir Yusuf jokes, alluding to the infamous Oscar moment between Will Smith and Chris Rock.

Doug, who is also the Stand-Up Collective co-founder, singled out the Roast of Boniface Mwangi as one of the most exciting ones.

“The man has fodder for days and being one of the first few ones, we knew he could take it as he has dealt with worse things. For us, it meant it would be a no-holds-barred session,” Doug said.

“Sanaipei was another one but for the opposite reason. Everyone loves her, she has no enemies, and we didn't know if we'd be courting trouble with her fans but it turned out to be one of the best because she was such a sport with a great sense of humour.”

Eugene said, “Roast House is funny, brutal, honest and a mirror reflection of our society, and that reflection is sometimes not pretty.”

Sarah Kabu who was known as the chairlady of the Goat Wives association advised other wives, "Ladies if you find yourself in this situation never ...
Exclusives
10 months ago

4 celebs accused of being pregnant at the moment

A host of celebrities are currently rumored to be pregnant and most of them have not addrressed the claims
Lifestyle
7 months ago
WATCH: For the latest videos on entertainment stories

"They talk ish behind my back!" Lillian Ng'ang'a on fake friends after break-up announcement